A detailed participant reportback posted on Indybay: Notes Concerning Recent Actions Against the Police. This is by far the best write-up we've seen on the demo:


On Tuesday July 19th, hundreds of people took to the streets of San Francisco in order to demonstrate their rage against the recent murders of Charles Hill and Kenneth Harding in the city by BART police and SFPD respectively. We marched behind a banner reading “they can’t shoot us all; fuck the police” as an expression of our intention that police murder will be met with resistance and retaliation every time they rear their ugly heads in our city.

A statement written by an anti-state, anti-capitalist feminist bloc was distributed during the march:


Women in poor urban communities are often both breadwinners and housewives. They are the ones left behind in the wake of these murders, beatings, and incarcerations, to hold the funerals, pick up the pieces, and fight the fight against their sons’, husbands’, fathers’ murderers... all while still being subject to patriarchal violence, sexual assault, and the de-funding of social services, the cutting of the public sector particularly where it employs or supports women of color. The police targeting of young men of color is a phenomenon that ripples outward and effects the gendered structure of poor communities, that affects women as well as men, but in a different form. 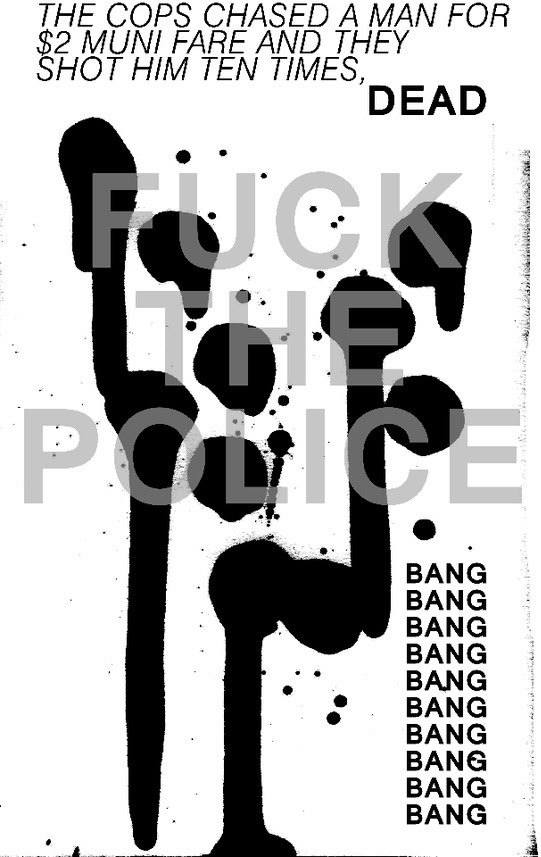 An open letter to SFPD and BART police, from Surf City Revolt:


Dear SFPD and the BART Police,

Please do not consider yourselves special. We hate you this is true, but it does not come from our hearts. It comes from the entirety of our beings. Our lives our antagonistic to yours in every way shape and form. We did not develop a feeling of disdain for you over time but under capital and the state apparatus we were born enemies. This is why San Francisco was shaken like an earthquake on Tuesday. As police you exist to protect the relations of capital, the dominance of the state, the reproduction of apparatuses meant to enforce our subservience and docility. Capital depends on your existence for its protection. However we exist to see your total elimination. We are the ones who produce value for capital. Who work for others. Who pay rent. Who are unemployed. Who are students. Who are women. Who are queers. Who are brown. Who are hooligans looking for fun. Who evade fare and die trying. Who black out on BART platforms and get killed for it. Who are unarmed and executed on New Years just trying to get home. Who have nothing in this world. We are the elements you either must be scared of, prepared for or both. Confrontation is essential to our relationship. You stand between what is possible and what is horrible in this world of capital. And it is not just you, but all like you, police everywhere. We say this with the utmost seriousness and lucid consideration. This is not childish rage nor a mosh pit at a punk show, this is fact. You do not defend nor protect us, but kill us in cold blood for reasons out of individual officers control. There are no good cops and bad cops, only a social relation of submission, domination, and enforced value extraction. You are the material line of defense between us and another world beyond the tragedy we live in.

Stop playing stupid. You know exactly why paint, hammers, and fireworks were thrown. You know why 200 people from all over San Francisco and the Bay Area took to the streets angry. Why passersby stopped to yell obscenities at you in a fit of rage. There is no mystery - this is war. This is only the beginning, trust us there is more to come.

Last night, a townhall meeting took place in Bayview where the SFPD Police Chief Greg Suhr was going to (once again) present the official story of the shooting and take questions from the community. It didn't go so well:


Police Chief Greg Suhr was met with a hail of boos, jeers and curses by members of the Bayview community Wednesday night, prompting an early end to a planned dialogue about Saturday’s fatal shooting of an armed parolee by officers.


After Harding’s shooting, the street filled with 20 cops carrying semi-automatic weapons, [community activist Geofrea Morris] said. “Nobody burned anything or caused civil disobedience. Why would they send so many cops?”

She said she was happy that people had gathered in the Mission District on Wednesday. Even though the protest led to 43 arrests, police in the Bayview are much harder than cops in the Mission, she said.

“I am glad they did that in the Mission,” she said. “They are not scared, like us.”

Two articles on the murder have been published at Counterpunch in the last day or two. First, a longer analysis by UC Santa Cruz grad student Mike King, "A Life Worth Less than a Train Fare":


Another young, unarmed black man, Kenneth Harding, has been gunned down, shot numerous times in the back as he fled, his empty hands in the air in broad daylight. His crime had been a simple train fare evasion for which San Francisco police executed him in the street. Dozens of witnesses saw a sight that has become commonplace in US cities, capturing images with cell phones of police surrounding the man and watching him struggle and writhe from a distance, in a swelling pool of his own blood. Without either offering the severely wounded man assistance, searching him, or otherwise looking for the supposed weapon, the police, most of whom had their backs turned to the suspect, would later try and say that he had fired at the them and randomly into the crowd that had assembled. No one in the crowd said anything about him having or firing a gun. Police would later say one had mysteriously appeared, via an informant. The police publicly named Harding as a "person of interest" in a Seattle killing, a day after he had been shot dead by police. They are using a criminal conviction to attempt to further devalue his life. This piece is not about previous convictions, or the "official story" which the police are constructing as I write, about post-mortem murder suspicions and mystery guns. One thing is clear, as far as police knew he was a simple fare evader. As far as multiple witnesses could see, Harding had no gun and the shots all went one way.

Whether BART police, Oakland PD, or SFPD, the stories have been very similar. Suspects are gunned down in the street, no weapon, usually shot in the back as they ran, almost all men of color, a homeless or mentally-ill white man here or there. We get a similar story each time. One that is weak, lacks probable cause for lethal force, and is based on the opinion of the offending officers whose word is unquestioned by superiors, city officials, or the corporate press. Unless there is a video. Mehserle, the cop who shot Oscar Grant, thought his glock was a lighter and larger and fluorescent tazer, though it had a completely different grip. An exception to the rule, Mehserle did time for his crime – a few paltry months. He was recently released. The OPD shot Derrick Jones in the back, he was carrying a scale. No charges were filed. Several killings of unarmed men of color in Oakland have yielded temporary suspensions, followed by reinstatements with back pay. Some acting, individual OPD officers have killed more than one unarmed man on separate occasions and still patrol the street, guns loaded, and ready to go.

The root causes of these murders by the police are multiple and far too complex to be fully discussed here: insulated and unaccountable police power committed to upholding a particular racial and economic order; psychological fear-turned-violence or plain hostility among the police; white supremacy at several levels of society from the motivations of suburban law-and-order voters to the historical legacies of the police in this country; to geographies of segregation, of which the Bayview is a prime example.

And a shorter piece by Patrick Madden, "The Police Murder of Kenneth Harding":


The Hungarian-Marxist Philosopher Georg Lukacs once remarked that economic crises have a demystifying and revealing effect on the class relations of a capitalist economy. Capitalism is predicated on the indirect domination of the majority of people in society by a relatively small minority of the owners of the means of wealth; the indirect-ness of this domination results in a situation in which the domination itself doesn't necessarily appear as such. In a crisis, the violent social relations that undergird the system are laid bare.

Of course the truth of this observation has recently been on display worldwide, almost since the beginning of the economic crisis that erupted in 2008. From Greece to the UK, from California to the Arab world, street battles and their necessary consequence, state murder, are on the rise. The scale of them may be different but the problem is the same: capitalist social relations, the social relations that determine who gets what, who lives and dies, who is free and who is incarcerated, are ultimately backed up by extreme violence. When the "ideological apparatuses" that maintain the normal reproduction of social relations fail, the cops step in.

Finally, a powerful piece by Tiny a.k.a. Lisa Gray-Garcia, in the SF Bay Guardian, "Killed for Riding While Poor":


For the last few years, police presence on Muni has increased — as have attacks on poor people and people of color whose only crime is not having enough money to ride the increasingly expensive so-called public transportation known as Muni. From fare inspectors working for Muni to fully armed officers, they form a terrifying mob waiting menacingly at bus stops in the Mission, Ingleside, Bayview, and Tenderloin, and then enter buses to harass, eject, and cite anyone too poor to ride.

Some pictures are up at Indybay; we expect more to follow.
Posted by d at 11:08 AM