The Campus Rights Project (CRP) at UC Berkeley has asked us to publicize the following two events that will be taking place this week on Berkeley campus:

The Campus Rights Project is working with Oakland Civil Rights Attorney Dan Siegel on issues regarding the December 11, 2009 arrests in Wheeler Hall. Dan is interested in meeting with people that were arrested to explore the possibility that the arrests violated civil rights law. At this preliminary stage, it is important for as many people as possible to meet with Dan. If he is able to proceed with a claim against the University or other officials involved with the arrests, he will need complete information and an opportunity to meet all of those who he is representing. Please attend this meeting. If you have any questions, contact CRP at crp.berkeley@gmail.com.

Thomas Frampton, who two weeks ago argued (and won) Boalt Law School's Honors Moot Court Competition in front of Supreme Court Justice Sonia Sotomayor, will be able to speak and advocate for his client. This will be the first time that the Office of Student Conduct (OSC) fulfills one (though by no means all) of its due process obligations and actually allows an adviser to speak for the defendant in the conduct hearings of the students who were charged with violating the code in November 2009. Should be quite a show.

[Update Friday, 7:30 pm]: We were tweeting during the hearing, during which the hearing panel had to leave the room to confer privately twice (once for an hour, another for two), one member of the panel officially recused himself, and the hearing was adjourned at about 6:30 pm. The only issues covered were procedural -- no evidence was presented. 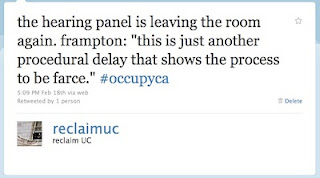