If you recall, we reported a little over a week ago that our comrade Julian Martinez’s student conduct hearing for the 11/20/09 Wheeler occupation ended before it even began. It was scheduled for Friday, February 18th, but the hearing panel spent most of the evening deliberating over several procedural matters, and neither side even had the opportunity to present their respective opening statements. After graduate student panelist David Fannon recused himself, Martinez’s hearing was rescheduled for February 28th. Martinez is not the only Wheeler student currently in the hearing stage of the student conduct process, but his hearing is the only one currently open to the public. Please come out and show your support!

We’ll have info on subsequent public hearings shortly. It sounds like one of our closest comrades will have his hearing for the Wheeler occupation a week from tomorrow. We’ll post details once it’s confirmed. In the meantime, please, please, please come out to Julian’s hearing and show him some solidarity.

The hearing will begin at 5:30 pm, Monday, February 28 in Building 14 on the Clark Kerr Campus.

[Update Monday, 12:45pm]: If you want to follow the hearing, it looks like @callie_hoo will be doing some live-tweeting.

[Update Tuesday, 7:58am]: Julian found "not responsible" (i.e. not guilty) for ANY of the charges against him! This is the one of the first times a protester from November 2009 has been cleared -- and, notably, it is the only time where the defendant's "adviser" (i.e. lawyer or lawyer-like helper) has been allowed to speak. Congratulations to Julian and to his adviser Thomas Frampton! Here's the summary from thosewhouseit:


For the first time, the Berkeley Office of Student Conduct (OSC) lost its case against a student protester who occupied Wheeler Hall on 11/20/09. Julian Martinez was found not guilty on all counts. The verdict was read around 1:30 am last night at his hearing on the Clark Kerr Campus. We highly recommend reading over the de facto summary on our comrade’s live-tweet. Thomas Frampton from the Campus Rights Project (CRP) ripped it. Highlights include Thomas telling the panel he is offended as a Berkeley student that this is the standard of justice on campus; pointing out that OSC threw a charge intended for rapists at most of the Wheeler occupiers; and telling the arresting officer that he is an embarrassment to UCPD. Congrats to Julian, Thomas, and CRP, and ironic kisses to the career functionaries at OSC.

We can draw several immediate conclusions from this decision. First, of course, it demonstrates the utter incompetence of OSC, which was unable to prove (even given the absurdly low standard of proof) that one of the protesters who was arrested in Wheeler Hall during the occupation was "responsible" (i.e. guilty) for even a single charge. At times like this, such incompetence ends up working out in the favor of student protesters; most of the time, however, it works against us. The reason is that the student conduct procedure is specifically designed to hold certain kinds of people (namely, students) accountable, while consistently letting administrators and institutions at large off the hook. Thus, we should not take this as a sign that "the system works" or let down our guard in any way -- rather, we should recognize that what just happened is a flaw in the system. We should also expect that flaw to be "resolved" quickly -- much like the comment made by undergraduate member of the hearing panel, Dawn Ling, on her AOL Lifestream page four days after Julian's prehearing ("Never pass up an opportunity to castrate a man") has since been removed. Don't worry -- we saved a screenshot of it. 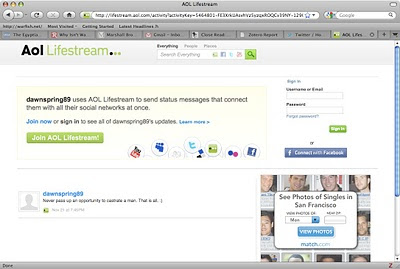 Second, this decision demonstrates the significance of affording students their full due process rights instead of the abridged version on which the student conduct procedure is based. Julian's case is the first time a protester from the 2009 occupations has been able to have his adviser speak for him; significantly, it is also the first time all the charges have been overturned. What this demonstrates -- and this is fairly obvious, but it still needs to be said -- is that someone who is trained in dealing with such pseudo-legal matters is obviously better at it than someone who isn't. By forcing students to defend themselves, OSC and the UC administration are blatantly attempting to skew the playing field.

Third, this decision calls into question all previous and future decisions regarding protesters from the 2009 occupations. What Frampton referred to as the "three P's" during the hearing -- procedure, politics, and proof -- are more or less the same in very case, and the university has failed in each of them. All previous decisions against student protesters have therefore been reached wrongly and should be retroactively dismissed; simultaneously, all future decisions must be seen through the lens of what happened here. This will be especially true if an adviser is not allowed to speak for his or her client.
Posted by d at 9:55 AM