SAN JUAN, Puerto Rico -- Student demonstrations are continuing to shake the University of Puerto Rico, in spite of the successful institution of a $800 fee increase. The first semester of the 2010-11 school year ended only just recently in late January. It was during the end of the first semester that hundreds of students held a sit-in and were all arrested. The second semester began on Monday this week with fresh new protests against the tuition increase and against the severe police repression students have been facing at demonstrations.

On Monday, Judge Rebecca de León Ríos, ruled that the suspension of a student leader and the university’s ban on mass demonstrations were illegal. Protests yesterday were reinforced by trade unionists and were met by riot police reportedly armed with lethal weapons. Yet, the police were overwhelmed by the number of people and retreated from the protestors. However, despite these victories several students were arrested Tuesday during further protests. 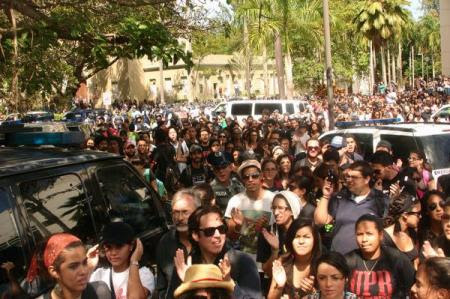 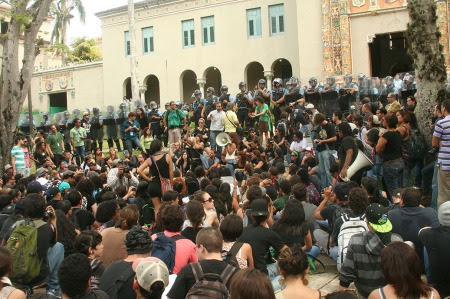 More photos here. Updates (in Spanish) are being posted throughout the day at Primera Hora and El Nuevo Día.
Posted by d at 4:34 AM