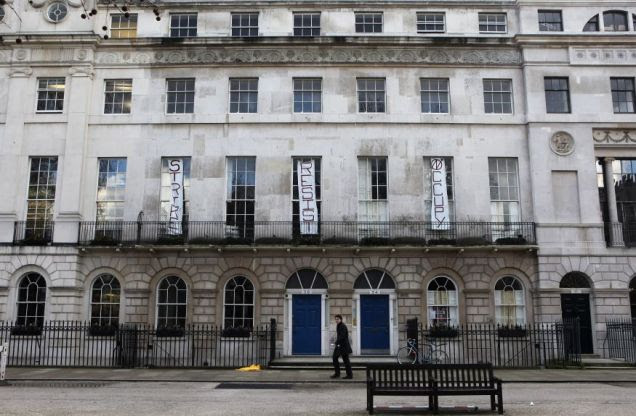 We're a little late to the draw on this one, but it seems that on February 13 a mansion valued at £6 million and owned by film director Guy Ritchie was occupied and converted into a free school by a collective appropriately called the Really Free School. The corporate media reported:

At least 12 people have occupied the large Grade I listed property in Fitzrovia and claim they now plan to convert the building into a free school.

The collective known as the Really Free School entered Mr Ritchie's property over the weekend.

The police were called but the squatters refused to leave.

They have now placed large banners in the front windows that say "strike", "resist" and "occupy".

Occupied, or reclaimed -- "It is believed Mr Ritchie wants to convert the former language school into two homes and sources claim the cost of the refurbishment could run into millions." In any case, unfortunately the squatters were evicted on Friday, but not before throwing a party and publishing a "Call to Celebration", which is below the fold:


I and many others, known and unknown to me, call upon you:

To celebrate our joint power to provide all human beings with the food, clothing and shelter they need to delight in living.

To discover, together with us, what we must do to use mankind’s power to create the humanity, the dignity and the joyfulness of each one of us.

To be responsibly aware of your personal ability to express your true feelings and to gather us together in their expression.

We can only live these changes: we cannot think our way to humanity. Every one of us, and every group with which we live and work, must become the model of the era which we desire to create. The many models which will develop should give each one of us an environment in which we can celebrate our potential -- and discover the way into a more humane world.

We are challenged to break the obsolete social and economic systems which divide our world between the overprivileged and the underprivileged. All of us, whether governmental leader or protester, businessman or worker, professor or student share a common guilt. We have failed to discover how the necessary changes in our ideals and our social structures can be made. Each of us, therefore, through our ineffectiveness and our lack of responsible awareness, causes the suffering around the world.

All of us are crippled -- some physically, some mentally, some emotionally. We must therefore strive cooperatively to create the new world. There is no time left for destruction, for hatred, for anger. We must build, in hope and joy and celebration. Let us meet the new era of abundance with self-chosen work and freedom to follow the drum of one’s own heart. Let us recognize that a striving for self-realization, for poetry and play, is basic to man once his needs for food, clothing and shelter have been met -- that we will choose those areas of activity which will contribute to our own development and will be meaningful to our society.

In order to persuade the citizen that he controls his destiny, that morality informs decisions, and that technology is the servant rather than the driving force, it is necessary today to distort information. The ideal of informing the public has given way to trying to convince the public that forced actions are actually desirable actions.

Miscalculations in these increasingly complex rationalizations and consequent scandal, account for the increasing preoccupation with the honesty of both private and public decision makers. It is therefore tempting to attack those holding roles such as national leader, administrator, manager, executive, labour leader, professor, student, parent. But such attacks on individuals often disguise the real nature of the crisis we confront: the demonic nature of present systems which force man to consent to his own deepening self-destruction.

We can escape from these dehumanizing systems. The way ahead will be found by those who are unwilling to be constrained by the apparently all-determining forces and structures of the industrial age. Our freedom and power are determined by our willingness to accept responsibility for the future.

Indeed the future has already broken into the present. We each live in many times. The present of one is the past of another, and the future of yet another. We are called to live, knowing and showing that the future exists and that each one of us can call it in, when we are willing, to redress the balance of the past.

In the future we must end the use of coercive power and authority: the ability to demand action on the basis of one’s hierarchical position. If any one phrase can sum up the nature of the new era, it is the end of privilege and licence.

We must abandon our attempt to solve our problems through shifting power balances or attempting to create more efficient bureaucratic machines.

We call you to join man’s race to maturity, to work with us in inventing the future. We believe that a human adventure is just beginning: that mankind has so far been restricted in developing its innovative and creative powers because it was overwhelmed by toil. Now we are free to be as human as we will.

The celebration of man’s humanity through joining together in the healing expression of one’s own nature and needs, will clearly create major confrontations with existing values and systems. The expanding dignity of each man and each human relationship must necessarily challenge existing systems.

The call is to live the future. Let us join together joyfully to celebrate our awareness that we can make our life today the shape of tomorrow’s future.