The Invisibility of Corporatization: On Sullivan and the Board of Visitors 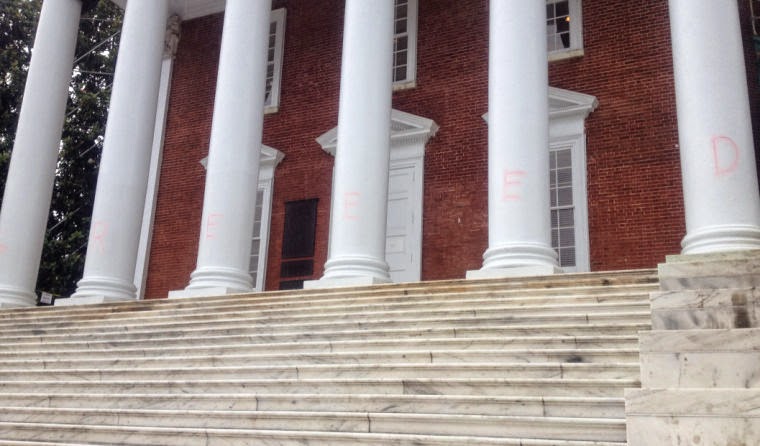 The firestorm over the firing of University of Virginia President Teresa Sullivan continues. Yesterday, hours after thousands of students, faculty, and workers held a demonstration in support of Sullivan, the Board of Visitors named Carl P. Zeithaml, head of the McIntire School of Commerce at UVA, interim president. Calling for the resignation of the head of the Board of Visitors, the faculty senate has planned a vigil that will take place this afternoon. And the word "GREEED" was graffitied in red dye on the columns of the Rotunda, the central building on campus.

Most commentators have framed the conflict between President Sullivan and the Board of Visitors as one of "broad philosophical differences," namely a tension between the "university" values of the former and the "business" values of the latter, made up of real estate speculators, hedge fund managers, and investment bankers. One of the earliest articles to publicize what was happening, written by UVA professor Siva Vaidhyanathan, praised Sullivan's leadership skills and vision for the university, while criticizing the language used by members of the Board to describe what they saw as her faults: concepts like "strategic dynamism" imported from the world of business. Vaidhyanathan writes, "The inappropriateness of applying concepts designed for firms . . . to a massive and contemplative institution as a university should be clear to anyone who does not run a hedge fund or make too much money." Similarly, David Silbey ridicules the emphasis on "strategic dynamism" and the "cultural obsession with the market" that exists here in the US, asserting that "If business and academia function exactly as they should, especially if they function exactly as they should, they are antithetical to each other." And David Karpf goes over the same argument once again in a piece published today. After noting the resignation of Vice Rector Mark Kington, one of the plotters involved in the backroom coup against Sullivan, he writes:


Much has been made of the strategic mumblespeak offered by Rector Helen Dragas. After two years on the job, President Sullivan had not demonstrated enough "strategic dynamism." She apparently was forging an incremental path for moving Mr. Jefferson's University into the future. The big donors on the Board of Visitors wanted her to run UVA more like a business.

It is certainly true that the importation of concepts from the business world, the corporatization of the university, the privatization of public education, and the financialization of everything have caused innumerable problems at public universities, none more significant than the $1 trillion of student debt that has placed students in a state of indentured servitude. But there's a serious problem with the way these arguments are being framed. Administrators have been running universities like businesses for decades. For this reason, the conflict between President Sullivan and the Board of Visitors is not a question of running the university "more" or "less" like a business. It is not a conflict between good, old-fashioned "university values" on one hand and nonsensical or inapplicable "business values" on the other. It is rather a conflict between competing business models.

President Sullivan herself has long been applying the language of business to the public universities where she's served as an administrator -- UT Austin, University of Michigan, and University of Virginia -- all sites of intense privatization during Sullivan's time there. Indeed, this is precisely why the Board of Visitors hired her in the first place. In his piece, Vaidhyanathan praises Sullivan's administrative prowess by noting that, once established at UVA, "she had her team and set about reforming and streamlining the budget system, a process that promised to save money and clarify how money flows from one part of the university to another. This was her top priority. It was also the Board of Visitor’s top priority." Initially, at least, all actors were in agreement with regard to the need to rationalize the university's money flows.

Over the course of two pieces at the Chronicle of Higher Education, Jack Stripling outlines Sullivan's proposal for a "more decentralized budget model" in a little more detail. "Often described as 'responsibility center management' or 'RCM,' the model allows individual academic units to retain the revenues they generate." In the other article, he continues:


Ms. Sullivan's signature effort over the last year was a reinvention of Virginia's budgeting model. . . . Versions of the model are employed by a number of elite institutions, including Harvard University and the University of Michigan at Ann Arbor, where Ms. Sullivan was provost before she came to Virginia.

Ms. Sullivan's faculty supporters say her two-year tenure did not allow enough time to test the model, which is designed to promote creativity and entrepreneurship among departments that will benefit directly from money-making programs.

In his book Shakespeare, Einstein, and the Bottom Line: The Marketing of Higher Education, David Kirp tracks the rise of RCM, focusing especially on the experience at USC. He writes:


Proponents [of RCM] contend that a university should be run like a firm, in which every academic unit carries its weight financially. In business terms, that means each unit is expected to be a profit center. Whether it's the college of arts and sciences, the dental school, or the business school, the costs -- which include salaries, space, and the like -- cannot exceed the revenues, whether raised through tuition, contracts, grants, or gifts. A school that runs a surplus gets to keep it, while a school with a deficit has to pay it back.

Though this sounds arcane, the stakes are high. The debate over the wisdom of running a university according to the principles of the corporate profit center is in essence a contest of worldviews. It is an argument between those who believe that the citizens of a university are members of a company whose chief mission is to maximize dollar profits and those committed to the idea of the university as a community in which "gift relationships" are the norm. (pp. 115-16)

What's interesting about this formulation is how much it resonates with the standard story about Sullivan's ouster. What appears here as a "contest of worldviews," one essentially corporate and the other essentially academic, is resurrected in a very different context today. Its appearance is the same, but on scratching the surface it becomes clear that the goalposts have shifted, that the worldview that Kirp identified as so clearly corporate and inappropriate to the university context has simply become part of the norm, a principle so obvious that it no longer seems out of place or offends. In a way, this invisibility, the fact that so many critics have missed the fact that Sullivan's leadership, like that of the Board of Visitors, is informed by business practices, is one effect of privatization -- we no longer recognize it even when it's right in front of our eyes.

The structural logic of administration makes it impossible for university administrators today to opt out. No university president, however independent, can hold out for long against the pressures of the academic market. It doesn't make sense to criticize the corporate "mumblespeak" of the strategically dynamic Board of Visitors without at the same time understanding that President Sullivan not only used such language herself but made its implementation at UVA the "signature effort" of her presidency.

Sullivan's ouster was not the result of a clash of worldviews, academic and corporate. It wasn't about running UVA "more" like a business. It was a conflict, rather, between different business models that could not be effectively brought together. That's why bringing Sullivan back, as the faculty senate hopes to do, will not keep the market out of the university. It's not administrators but students and workers that are fighting privatization and austerity at every step of the way. Only by eliminating the administrative class can a new kind of university emerge.
Posted by d at 2:31 PM