[Update 2, Friday 2/10]: Closing statements were made this morning; as of about 5:30pm the jury has returned a verdict: not guilty. There will be no accountability through the courts.

[Update 1, Tuesday 2/7]: Today the UCB grad student whose hand was smashed by UCPD Officer Brendan Tinney on November 20, 2009 gave her testimony and was cross-examined by the university's lawyer.

The trial continues tomorrow (Wednesday) morning at 8:30am, same time same place as before [scroll down]. Tomorrow's testimony will be worth checking out: first, Officer Tinney himself, who makes over $97,000 to assault Berkeley students, will take the stand. He will be followed at about noon by star Berkeley Law student Thomas Frampton, who we last saw successfully defending two students from UCB's incompetently nefarious Office of Student Conduct. Finally, the prosecution will call police expert Roger Clark.

Thursday won't be that important for folks to attend (the defense will call their medical expert and their own police expert). But Friday will be the most important day of the trial. That's when both lawyers, John Burris for the prosecution and Claudia Leed for the university's police-impunity machine, will make their closing statements and the jury will start making their decision. Pack the courtroom on Friday morning in solidarity! 8:30am, same time same place. 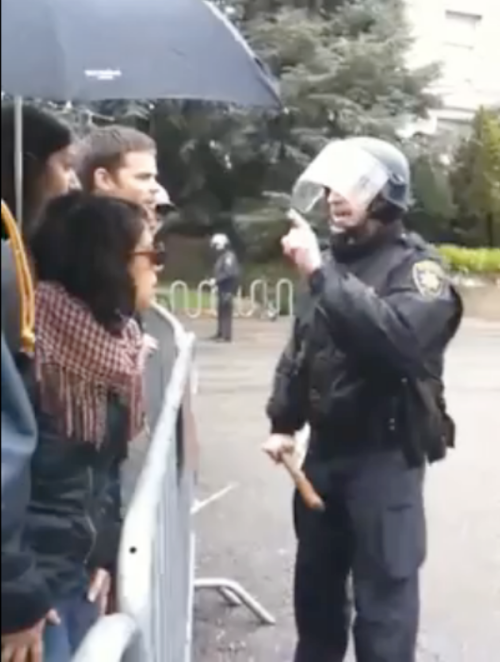 On November 20, 2009, outside of Wheeler Hall, UCPD officer Brendan Tinney used his baton to smash the hand of a UC Berkeley graduate student who was standing behind a metal barricade. Her hand was smashed to pieces, and she had to be rushed to the hospital for reconstructive surgery -- even so, the attack left her disabled for life. (The above picture was taken just before the brutal attack.) UCPD's internal investigation, not surprisingly, completely exonerated Officer Tinney from any wrongdoing, finding that his actions were "proper, lawful, and appropriate":


The Board’s goal was to look at the actions of the officer and determine if they fit within the parameter of reasonableness. The officer clearly communicated several warnings to you with instructions for you to keep your hands off the barricades. In fact, you initially complied with those warnings and temporarily removed your hands from the barricade. It was only after your failure to heed the repeated warnings that the officer increased his level of force from a verbal admonishment to a strike against the rungs of the barricade. When you again returned your hand to the barricade, the officer applied the next level of force by striking you. The Board determined that the officer used a continuum of force that was within reason and within his authority during these circumstances. The Board’s finding of your allegation is exonerated.

Today, over two years later, a trial against Tinney is finally set to begin. Jury selection will start at 8:30 am in Courtroom 15 (15th floor) of US District Court, Northern District of California, located in the Federal Building, 450 Golden Gate Ave, San Francisco (near Civic Center Bart). We will be bringing you updates from the trial as frequently as we can and posting them here.
Posted by d at 8:01 AM

Labels: "Violence" and "Nonviolence", cops pigs murderers, Policing Your Way Out Of A Crisis, Violent Technocrats, we object, wheeler