Another Round of UC Construction Bonds Backed By Tuition Hikes 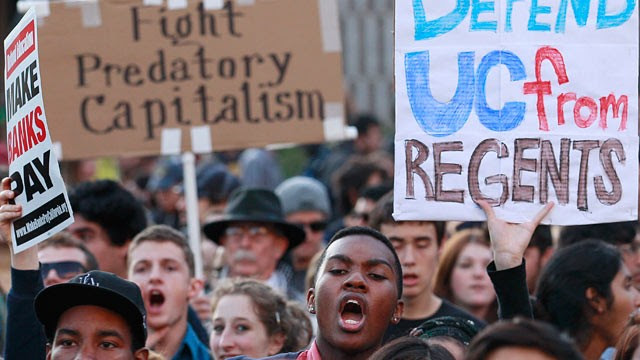 
The California State Treasurer’s Office sold $860 million worth of University of California 100-year bonds, which will be used to fund capital projects at the university, to 70 large investors Tuesday.

The money raised from the sale of the bonds — which mature over the course of a century and pay about 4.9 percent semiannual interest rates in May and November — will be used for long-term UC capital projects approved by the UC Board of Regents, according to UC spokesperson Dianne Klein. The bonds will also fund individual capital projects at UC Berkeley, UC San Diego and UCLA, including a portion of the repair of Memorial Stadium, according to Klein.

UC bond sales are part of standard operating procedure and take place a handful of times each year, but this sale was unprecedented because of its 100-year maturation period combined with the large value of the sale, according to Tom Dresslar, director of communications at the treasury.

The 100-year bonds were designed to appeal to institutional investors, including insurance companies, hedge funds, banks and pension funds, whose interests span multiple generations, according to Klein.

The university is the real world. One positive effect of these bond sales is that they reveal -- if there were still any doubt -- the many and intimate ways in which the UC is tied to the world of Wall Street finance. These ties are the result of a series of conscious decisions made by UC administrators and the Regents to transform the university into a profit-oriented, revenue-generating institution. State funding has decreased, but the shift toward this privatized model, in which the university increasingly generates unrestricted revenues through student tuition hikes (themselves backed by student loans) on one hand and the exploitation of workers on the other, is not, or not only the result -- it is also a cause.

The Daily Cal article unexpectedly pulls a Meister and does a good job of outlining the economics of UC bonds by going back to a 2009 sale of $1.05 billion in construction bonds:


In August 2009, the UC announced that proceeds from approximately $1.05 billion in federal stimulus “Build America Bonds” sold to the public would help fund about 70 capital projects on all ten UC campuses.

In a press release following the 2009 bond sale, Moody’s, a ratings agency, explained the appeal of UC bonds in a shaky economy, since the university has the ability to raise its revenue by increasing student tuition despite state budget cuts.

“In-state tuition has increased dramatically,” the press release stated. “And the out-of-state market remains a comparatively untapped resource that could provide additional growth in tuition revenue should State funding be cut further.”

But they don't look as carefully at the bond report for the current sale, rated AA+ by Fitch. The first thing that becomes apparent is just how happy the bond raters are with the UC's financial managers:

As Bob Samuels has been arguing for years, the UC gets its "marching orders" from the bond raters. Fitch is down with the UC's "highly experienced management team" because they've done exactly what Fitch wanted them to do. As students and workers at the UC, however, we aren't so happy with their tenure because we viscerally understand that we're the ones getting screwed. The university is being run for them, not for us.

The other thing that's useful about these bond reports is their honesty. They tell us what the UC administration is really thinking about doing, without funneling it first through an (admittedly flawed) public relations machine. Again, Fitch is happy with the UC's plans for dealing with the likelihood of future budget cuts from the state. In fact, Fitch thinks these budget cuts are a good thing because they increase the university's "operating autonomy." What this means essentially is less restrictions on what the UC can do with its revenue -- while state funds are restricted, meant to cover the university's instructional costs, private funds are not, and can be used for anything from capital projects to paying debt service on previous construction bonds. Fitch tells it like it is:


Appropriations declined a total of $750 million to about $2.27 billion for fiscal 2012, including a mid-year $100 million cut resulting from the state's ongoing revenue shortfall. UC took numerous steps over the past few years to offset the loss in state funds, including significant student fee increases, staff reductions and other cost savings initiatives. On a combined basis, these measures have enabled UC to close about 26% of the total fiscal 2012 budget gap (approximately $1.1 billion).

While the governor's fiscal 2013 budget proposal, currently under review by the state legislature, recommends no further cuts to UC, Fitch believes that state funding for higher education will face continued pressure going forward. The budget proposal is dependent upon various revenue generating ballot measures subject to voter approval. Should these measures fail to gain approval in November, the proposal calls for a $200 million appropriation cut to UC effective Jan. 1, 2013.

The university's management team continues to explore various options to offset reduced state aid, including working with the state on a potential multi-year funding agreement which would provide UC longer term stability in state support in exchange for increased operating autonomy. Options being considered under this agreement include specified general fund increases through fiscal 2016; an increase in the state's share of employee retirement plan contributions, both subject to voter approval of the above-mentioned ballot measures; and more regular, less dramatic increases in tuition.

UC continues to benefit from one of the most diverse revenue streams in higher education, and Fitch notes positively its low and declining reliance on state aid as a revenue source (12.1% in fiscal 2011). The university's other significant funding sources include revenue derived from the operation of its five medical centers (27.1%), grants and contracts generated by its substantial sponsored research activities (24.5%), and student-generated revenues, including tuition, fees, and auxiliary receipts (16.6%).

Straight from Wall Street to the UC: another round of construction bonds, another set of marching orders.
Posted by d at 12:41 PM