Reaching Out to the Faculty

Yesterday we posted some of the administration's emails regarding UCPD's brutal attack on the #occupycal encampment on November 9. In these emails, Chancellor Birgeneau, who was out of the country at the time, is notified of what happened, and responds that the violence is "unfortunate" but necessary. "Obviously," he wrote to Executive Vice Chancellor and Provost George Breslauer, "this group want [sic] exactly such a confrontation." Later, Birgeneau wrote again to Breslauer, declaring that upholding the university's encampment policies at any cost was essential: "Otherwise, we will end up in Quan land."

These emails, along with a number of other documents, were uncovered by the ACLU of Northern California by means of a Public Records Act request. One of the other emails, not discussed by the ACLU or in the Chronicle article ("UC chancellor raised no objection to baton report"), caught our eye, especially because of some of the ongoing conversations about faculty and solidarity. Yesterday, for example, our comrades over at the Bicycle Barricade posted an important analysis of the situation at UC Davis in the context of the recent vote on a motion of no-confidence in Chancellor Katehi which was not approved. The piece should be read in full, but for now we just want to quote a small part:


Many professors, believing themselves to be the beneficiaries of privatization (in the form of grants, donations, endowed positions, etc.), support Katehi’s agenda. Now we know that at least 343 of them support enforcing privatization by violent means. This is useful knowledge.
We also know that “only 37% of UC Davis faculty vote on measures regarding campus events that received worldwide attention.” And professors complain about student apathy.

Those professors who brought forward the motions of no confidence and against police violence should be applauded. It’s risky to speak out when promotion and tenure depend on toeing the line. It’s encouraging to note that 312 professors support their students.

But these motions highlight the limits of institutional struggle (petitions, motions, declarations), where the administrators will always have the upper hand. They write the rules, and circumvent them when necessary. For years, faculty have fought a losing battle to defend shared governance, tenure-line positions, and academic freedom from a rapacious administrative logic. It’s time to abandon institutional forms of defense and turn the tables on the admins. Solidarity means attack.

With this in mind, take a look at the following email, sent by Vice Provost Janet Broughton on November 16: 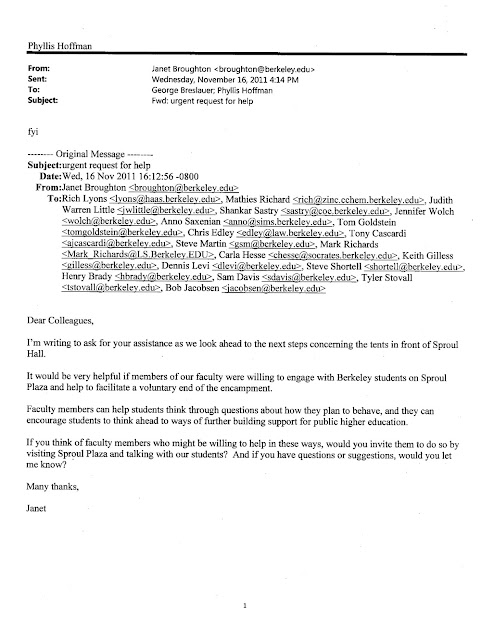 If de-escalation is the administration's goal, direct action is the only alternative. We join with our comrades from Davis in calling for the faculty to reject institutional forms of struggle -- which are inevitably coopted and recuperated -- and join with students and workers in shutting down this university.