A beautiful book bloc, appropriately featuring Foucault's Discipline and Punish, faced off today against the cops called in to defend the UC regents. The LA Times takes a good picture, but writes a terrible article:


Two demonstrators were arrested for crossing the police lines at the Student Union Building, according to UC Riverside spokesman James Grant. No one was reported seriously injured in the incidents, although one campus police officer suffered minor cuts on his hand from a demonstrator’s sign, Grant said.

One campus police officer suffered minor paper cuts on his pinky. Certainly, there were no students beaten with police batons or shot with rubber bullets.


Clearly, UC officials did not want a repeat of the controversial incident in November when UC Davis police pepper-sprayed student demonstrators at that campus. 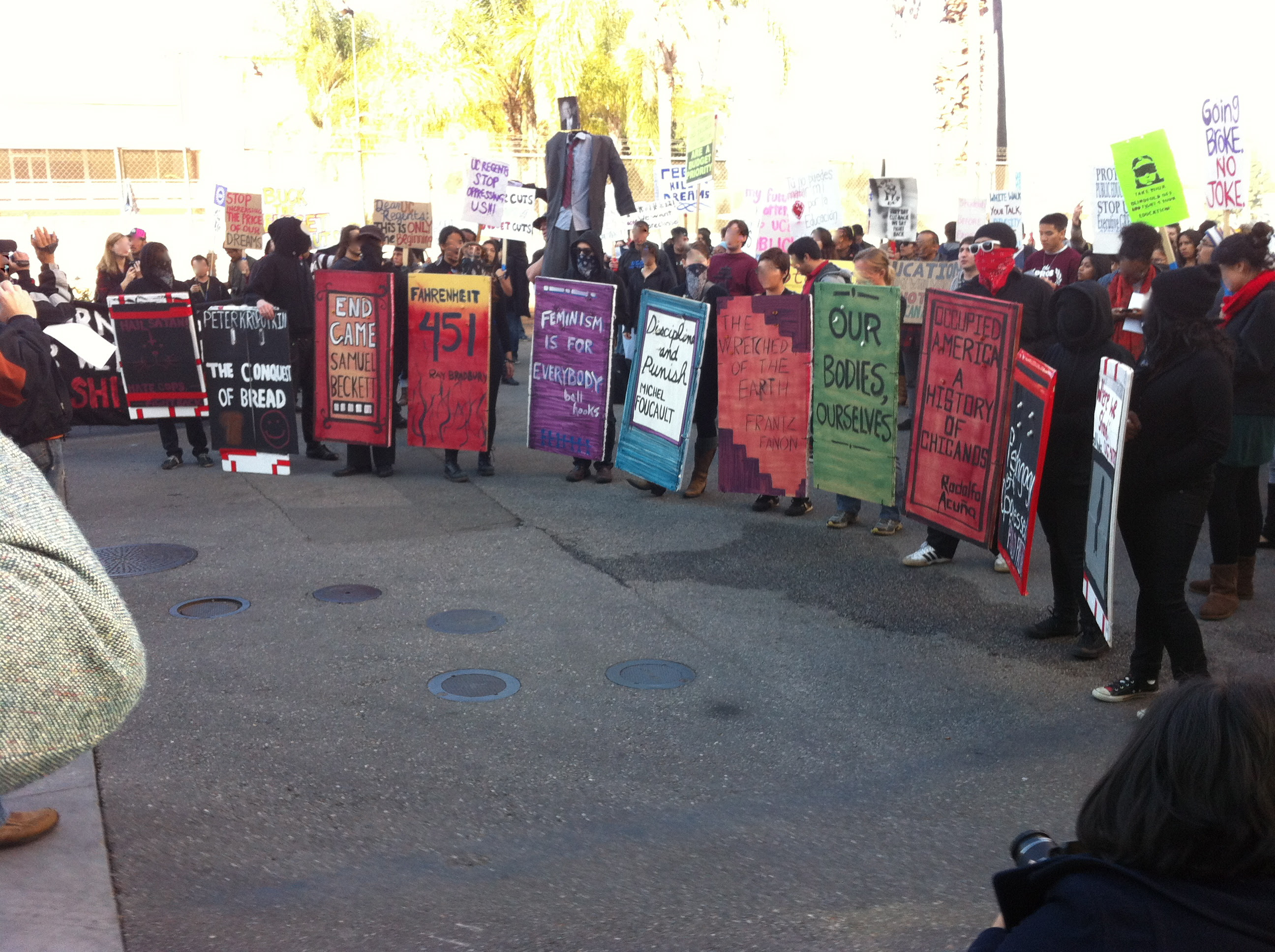 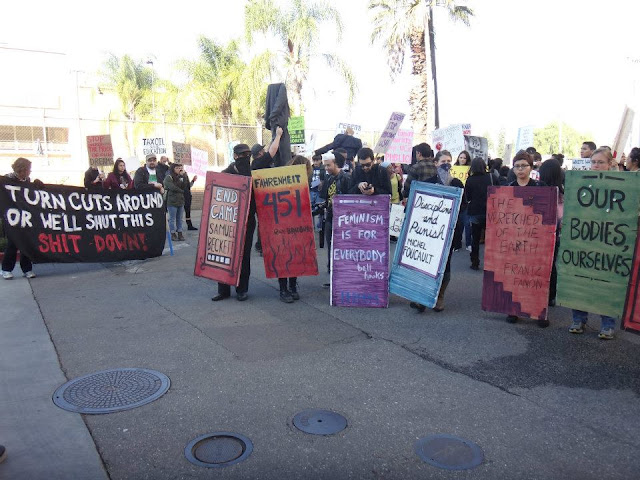 Fuck the police and their stenographers in the mainstream media. The real reporting's from our comrades at UC Rebel Radio:


The UC Regents' Meeting at UC Riverside began early today. Most mainstream media were inside the HUB building in which the Regents gathered. While we waited outside, reports from inside were telling that the public comment session was often interrupted by the Regents in their failed attempts to appease the student protesters who only had 1 minute each to express themselves. One comment was that regent Sherry Lansing tried to address the students by the usual means of misdirecting the students efforts towards the capital. The reports were that her comment was "useless and boring". After the public comment session was done with, the students offered their own meeting via mic check. But the Regents did nothing but hide in another room with very few people allowed in from the public. Police remained inside but did not move to arrest anybody. At around 1 p.m. everybody was running from the front doors of the HUB to the back doors through which the Regents were supposed to make their quick escape. Students took over a staircase and then another as police in riot gear blocked their way. Administrators were seen at the windows and balconies of the buildings while talking on their cell phones, taking video, and laughing at the people below them.

The police issued several orders to disperse and every time the students booed them and asked them "Why do we need to disperse? Give us a reason!" But the police only managed to repeat the same statement over and over. At one point the Chancellor of UC Riverside, Timothy P. White was seen on the balcony and was confronted by students asking to be allowed into the building and to the meeting. Upon being recognized, he quickly left the balcony and went back inside the building to never be seen again.

Later in the day, at around 3:30 p.m. the students were notified by scouts that the police were gathering in the back to make way for the exit of the Regents. Students split their ranks and took both exits, but no Regents were seen. At 4:30 p.m. (give or take) the Riverside Police Department sent in re-enforcements and the police line started their push back on the back side of the HUB building next to the parking lot.

Rubber bullets and pepper balls were fired. The police was chased over to the other side of the building. Over 5 people were arrested and there was a rumor that a fence was thrown at the riot police.

Word is that this face-off is still on-going.

We will keep you updated.

[Note: most the videos that were originally posted below have been moved to this post.]

[Note #2: for a more detailed analysis of the day from a comrade down south, check out these reflections.]