From an anonymous friend... This narrative of January 20th 2012 mostly follows the big sound bus brought by the Occupy Oakland Reclaim the Streets party. It ends during the building takeover, so there's more to the story if someone wants to add.

The morning's actions began before the sun came up, but not before the rain. Bechtel was quickly militarized (pun intended) with barricades and security guards, but people had already managed to get inside and squat the lobby. There were banks locked down or shut down all over the financial district. The sound bus gathered people and energy until the first Reclaim the Streets. It snaked around, visiting and supporting each lockdown or action and brought the music, dancing, and other ruckus with it. Bechtel was the first stop; shaking collective asses, blocking traffic to one of the world's most insidious military industrial leaders seemed to set a tone for the RtS. There was a move-in house party in front of Citibank to oppose foreclosures that included a Christmas tree, couch and TV. Code Pink was outside of Goldman Sachs with a person-sized squid to call attention to GS's slimy and sucky business dealings.

The intersection of California and Montgomery became a very important place at which to continue causing trouble all day long. Wells Fargo on one side with badass queer folks locked down and Bank of America on the other side with more lockdowns made it an ideal spot to park the bus and party and block traffic. When the police spastically arrested one person and the crowd surrounded them, many more cops showed up and the bus moved on.

Back at the Bank of America one block from B. Manning Plaza (aka Justin Herman) some folks had renamed BofA the “People's Food Bank of America” and served some delicious food to anyone walking by hungry. The bus crew was happy to partake when they arrived back at Embarcadero in time for the noon march.

The noon march was led by folks against ICE and was more regulated, but it in some ways it resembled the RtS. Although there were the ubiquitous orange-vest-people keeping the march on one side of the street, it also went to visit and support other actions before it arrived at ICE. Once ICE had been shut down, the march more or less dispersed and the RtS continued where the march left off (but without orange-vest-people of course.) Back to California and Montgomery, where the cops cut off the bus so it couldn't park again in front of the lockdown. There was one more stop before meeting up with the big evening march at BM Plaza. Unite Here Local 2 was picketing outside the Hyatt by Union Square. The union folks seemed a little less excited about being innundated with clowns, jugglers and other miscreants than the other actions, but when some bus folk joined the picket they got more into it. Suddenly it became apparent that the fountain outside the hotel had been filled with soap, because bubbles started flying in the wind, covering anyone in their path. 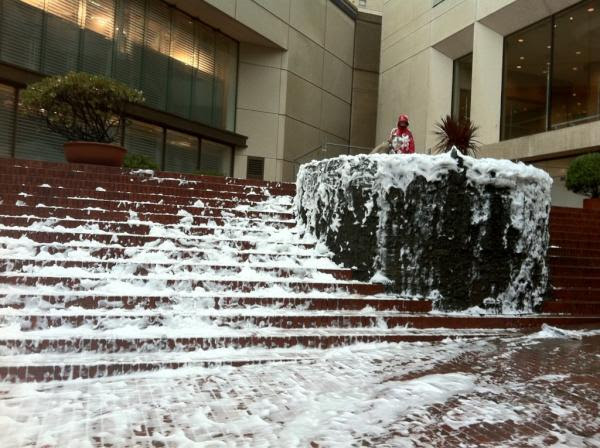 Real trouble started right before the bus was about to leave the Hyatt. One especially friendly officer threatened the bus driver with 15 points on his driving record and suggested that he take the bus and leave town, though in different words. With threats still fresh, the bus left without the RtS and they marched back to BM Plaza. About 15 minutes before the march started, word went around that the bus was pulled over for something having to do with the taillight. About 50 people ran over to support, but were surprised to see the whole march come up the street and surround the bus and all the cops on the scene chanting “Whose bus? Our bus!” and “Cops go home!” 10 or so minutes later, the cops let the bus leave. Not sure exactly the end of the bus story, whether it got back to Oakland or not, but hope to find out soon.

The building occupation crew waited for a while at their meetup spot for the rest of the big march to arrive. They double-checked their banners and some masked up for the action ahead. Spirits were rowdy and high on the way to the building. The anti-capitalist bloc shouted at the police riding their motorcycles on the sidewalk and prevented cars from driving through the crowd. The building itself was huge – really, really huge. It was unbelievable at first that it could be empty. There were already police barricades set up, but the march was told that there were already occupiers inside. The cops started forming lines on either side of the block filled with people, and the fear of a kettle situation was real. Folks started walking down the block, and surprise! The Bentley dealership got its windows smashed by a couple of people. After an announcement that people were inside and wanted support, the march turned back toward the building. 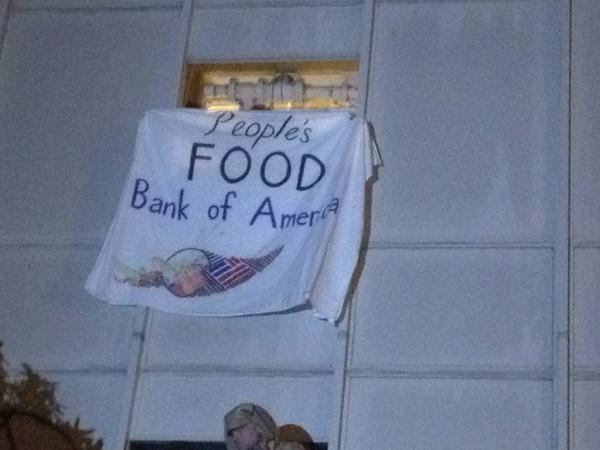 However, this author did not. If anyone knows the rest of the story, please contribute!
Posted by d at 4:58 PM