Back to the Anthro Library! 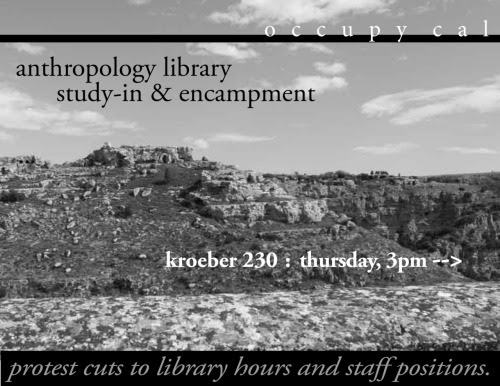 One of the first direct actions during the fall 2009 cycle of anti-privatization protests was the "study-in" at the Anthropology library. Due to budget cuts, or so the administration misleadingly suggested, the library's hours had been cut back to the point that it would no longer open during the weekends. As midterms were coming up, students were desperate for places to study. On October 9, 2009, a group of about 300 students, workers, and faculty moved into the library and refused to leave at its 5pm closing time. UCPD initially attempted to remove them but in the end opted not to intervene -- most likely out of the administration's fear of the photos of cops dragging struggling students from the library -- and the library was held for a full 24 hours. During that time, there were study spaces, teach-ins (including a presentation by Bob Meister in which he presented for the first time his groundbreaking findings that would be published the following day as "They Pledged Your Tuition to Wall Street"), spoken word, free food, and lots of sleeping bags and pillows. On leaving the library, organizers vowed to liberate one library every week and designated the Ed/Psych library the next target. In the interim, and notably without any demands having been made, the administration miraculously found the money to keep the libraries open. Not student government, not lobbying in Sacramento, not signing petitions, not even holding rallies -- it's direct action that gets the goods.

But now, they're trying to cut the hours again. They think we're not paying attention. But we are. And we're going back:

Occupy Cal is calling for a ‘Study-In’ encampment inside the Anthropology library, Kroeber Hall, for Thursday, January 19 at 3pm. The Anthropology library is a recent victim of harsh service cuts caused directly by the university’s mis-management of funds and privatization. The hours are being cut from the previous, already slim, 9am-6pm hours to the current 12pm-5pm hours. This is part of the story of how university administrators are failing the educational mission of the UC, part of the corporatizing and privatizing movement. The UC regents recently raised selected salaries by 21%, yet we are still experiencing the cutting of extremely valuable resources for our education. Bring Your Own Tent, sleeping bags, and pillows for Occupy Cal’s first encampment of the Spring 2012 semester. Let’s keep the library open as a shared public space!

Join Occupy Cal in a Study-in and Encampment to protest these cuts!


This action is in solidarity with the Regents' meeting protest at UC Riverside.
Posted by d at 7:55 AM