On the UCPD's 5150 detention of Alex Kim (Update: Alex has been released) 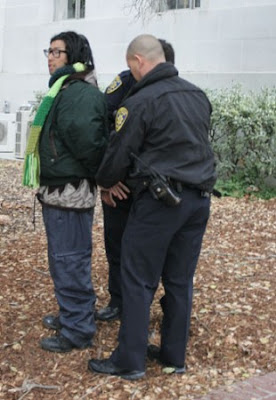 Update (11:31, Sunday evening): Alex has been released from Alta Bates.

Last Wednesday evening, as I sat on the Mario Savio Steps in front of Sproul Hall waiting for the Peoples’ Police Review Board meeting to begin, Alex Kim greeted me and silently handed me a small flower. Each time I visit the site of our Occupy Cal encampment, I look forward to seeing him and hearing him play the violin or just adding a bit of friendliness to our little community. Alex has continuously occupied our encampment since the day it was erected, and beginning in late November, he took a voluntary vow of silence as a means of nonviolent protest.

At 4:38 p.m. on Sunday afternoon, Alex was approached by UCPD officers who grabbed and handcuffed him before taking him away. According to several witnesses, police officers responded that he was arrested under Section 5150 of the California Welfare Institutions Code, which states, “When any person, as a result of mental disorder, is a danger to others, or to himself or herself, or gravely disabled,” he or she can be taken to “a facility designated by the county and approved by the State Department of Mental Health as a facility for 72-hour treatment and evaluation.” In other words, as a result of his choice to remain silent, Alex was deemed mentally unfit. But we understand that this was not the real reason for his arrest; rather, Alex was targeted for his dedication to the Occupy Movement.

As someone who knows Alex, I believe that this is a truly abhorrent abuse of police power—one that threatens all of us with arbitrary and psychologically damaging detentions under the auspices of public safety. Not only have our freedoms of assembly and speech been repressed, but now, even our constitutional right to remain silent is being actively undermined.

Labels: cops pigs murderers, Policing Your Way Out Of A Crisis