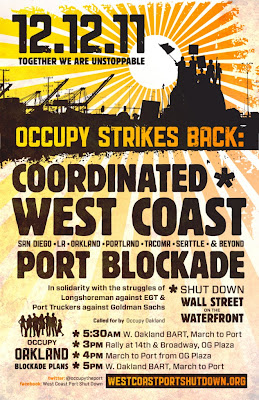 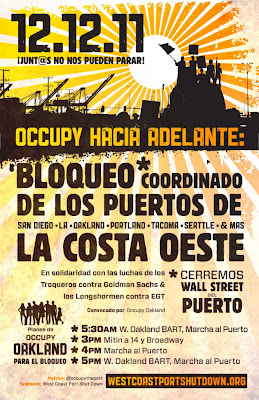 Monday 12/12 Oakland Schedule (at bottom of poster as well):

From Noon to 3pm, there will be performances at Oscar Grant Plaza.

This will be the biggest move the Occupy Wall Street Movement has embarked on.

12 Reasons To Shut Down The Port of Oakland on December 12. 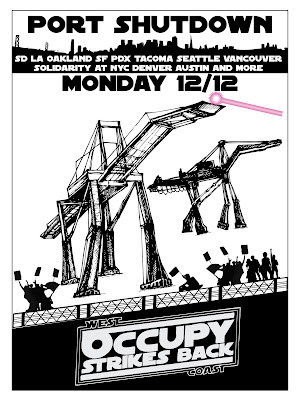 From "Occupy vs. Big Labor" by Emily Loftis

"On Dec. 12, general assemblies (the decentralized governing bodies of OWS) in Los Angeles, Oakland, Calif., Tacoma, Wash., Santa Barbara, Calif., Portland, Ore., Seattle, Longview, Wash., San Diego, Anchorage, California’s Port Hueneme region, and dozens of smaller camps plan to blockade ports and halt commerce for a day. There is a combined Dallas-Houston effort to demonstrate at the port in Houston. Japanese rail workers, who are sympathetic to longshoremen, who work a partner company of Bunge — the company Occupy is protesting — will be demonstrating in Japan.

Farther inland, Denver will try to shut down a Walmart distribution center. Occupy Bellingham may block coal trains; and landlocked California occupiers will bus to the coast."