Live blog of People's Police Review Board at UC Berkeley 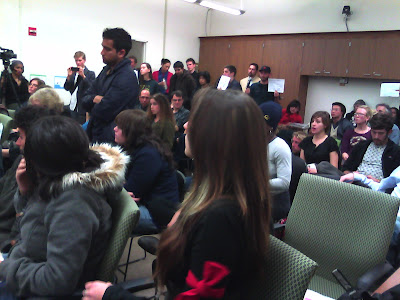 7:37: "...the UCB review board can't initiate investigations. they can't review UCPD polices. but there are a lot of policies and procedures that the UCPD uses that are seriously problematic, they can use choke holds (this hasn't been allowed at the city of berkeley for some time)..."

7:52: Next proposal: we know that the police shouldn't investigate themselves. we need a separate process to investigate police. also, this PRB isn't effective. we should be making a board to look into PRB, and start investigating police policies.

7:57: UCPD rep is telling us there will be a cop in the doorway till we're done.

8:02: Next proposal: Can we give concrete proposals for how cops should act, how they should be evaluated; would we recommend a 360 degree review process.

8:03: Next proposal: This body should put out reports regularly. There should be a way to hear complaints, and we should ask for complaints about recent months.

8:04: We should try to get similar boards going at other campuses, other places.

8:04: Proposal: That we investigate other events as well as Nov. 9.

8:05: Proposal: I think it would be awesome to actually gather the testimony and the evidence. That's easy. Also, I think we should draw up a list of folks who are credible and who have experience, professors and community-based people, students, etc. Also, the ASUC should make a way and a place for this independent body. If we do this, ppl would be amazed and shocked.

8:07: Proposal: I think we should also review the police review board.

8:09: Discussion of the PRB standards for Nov. 9 review: board will determine whether the violence exceeded campus norms, but we have to determine what those norms are... PRB can't accuse officers, just make recommendations to the admin about how the police can become more efficient. Please discuss what the standards of the PRB should be for this investigation.

8:16: The PRB is split. Most of them are for the police. The minority isn't listened to when we raise criticisms.

8:19: Proposal: Talk about how people who testify can be protected, especially journalists. Also, we should request that procedures of PRB and their investigation be open to the public.

8:20: Proposal: Approach CRP and Uncivil Procedure about how to coordinate the investigation.

8:22: We're moving toward self-organized committees: A group to constitute a space where people can bring complaints; a group to organize investigations...

8:24: Talking about proposals for how to create investigative bodies that are accountable to the general, people's police review board / general assembly

8:36: Proposal that we have stable standards and practices for the investigations.

8:40: Discussing when and where we'll have our next meeting.... Wednesday at 6pm, Sproul steps. Facilitation committee is at 5pm on Sproul steps.

9:05: We just decided to break into working groups (one for collecting testimony; one for organizing investigations)....

9:10: Gonna sign off for now. Come by next Wednesday, 6pm at Sproul if you want to get involved in the People's Police Review Board!
Posted by a at 7:26 PM