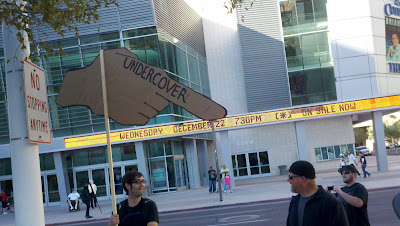 (image via the phoenix class war council)
What follows is a chunk of an investigative report that will be published soon in The California Aggie. It's based on documents obtained through a request under the California Public Records Act, the same way we were able to get our hands on that 300+ page document dump filled with internal UC Berkeley administration emails from the protests in November 2009 and live week. The new documents on which this article is based are available here. (Note, for example, the reference to our compañeros at the Bicycle Barricade on page 8.) Anyway, the article has been circulating by email at UC Davis, so we figured we'd post it here as well:


For several months, administrators, students, and police have been coordinating an under-the-radar response team to infiltrate student protest groups, relay information to administrators and police leadership, and control peaceful gatherings in response to tuition spikes and budget cuts.

At least one undercover police officer infiltrated the most recent protests on March 2: Officer Joanne Zekany of the UCDPD was dressed in casual business attire as she marched with students last Wednesday afternoon. When asked about her affiliation, Officer Zekany lied to students, saying she was an administrator with the Neuroscience Department in Briggs Hall, and made a disparaging comment about the intelligence of a student. Officer Zekany has worked for the UCDPD for over two years and was caught disseminating information regarding the plans and whereabouts of the peaceful protestors.

This comes in tandem with discoveries that have been made about the existence of a complex protest response plan established jointly between police, students, and administrators, on the wake of protests throughout the 2010-11 academic year.

According to documents released in response to a filing under the California Public Records Act, UC Administrators established the “Activism Response Team”-- a network of student leaders, high-ranking administrators, and police leadership in the fall of 2010 to keep peaceful protestors under the administration’s control through direct communication with University leadership, including Chancellor Linda Katehi. The group served to “accompany students” throughout protests, “observe the [protest] situation”, “update staff” about the situation, and “point out safety issues and risks to students”, according to an agenda schedule from August of last year.

Within the program, a “Leadership Team” was established that included many top-ranking UCD administrators, including Vice Chancellor Fred Wood, Vice Chancellor John Meyer, former Provost and Current Dean of the College of Engineering Enrique Lavernia, and Assistant Executive Vice Chancellor Robert Loessberg-Zahl. According to program documents, this group “makes decisions in communication with Chancellor [Katehi], Chief of Police [Annette Spicuzza], and Assistant Vice Chancellor [Griselda Castro]”. The documents do not address the potential political implications of allying the Chancellor and Police against student protestors.

According to a document titled “Student Activism Response Protocol” dated August 18, 2010, administrators were given the responsibility to “receive information from all Student Affairs staff regarding any anticipated student actions, not just those of registered student organizations”, “inform police and request standby support if appropriate”, and “notify and maintain communication with news service”.

Furthermore, the program encouraged police collaboration at times: A “Support Team” was established to “provide a presence at student actions and rallies”, “offer action sponsors suggestions on how to handle the crowd”, and to “request ... Police presence if needed”.

[Update Wednesday, 5:41pm]: Important follow-up from thosewhouseit, tracing the spread of surveillance and monitoring techniques on other UC campuses, from Berkeley to Santa Cruz.
Posted by d at 11:42 AM