Updates on the NO Vote: How the UAW Works [Updated]

This open letter from a former Berkeley unit chair is a helpful addition to the numerous reasons we have for voting NO on the tentative contract agreement that the UAW leadership is pushing on us. But it's even more interesting in terms of the way it details some of the internal practices within the union, practices that make it completely unresponsive to and unrepresentative of its graduate student members:


The year before last I became, almost accidentally, first the acting then the elected Chair of the UAW for Berkeley. I was recruited to this position and agreed to it without much understanding what it entailed. This seems to be standard MO for the current statewide leadership; after I had agreed to stand for the position it was hinted to me that nefarious and disruptive people might try to challenge me for what is, after all, an elected position. As it turns out, no one did, I was “elected” by all of you without you having any idea, unless you actually read all those emails full of dense and formal bureaucracy-speak that you receive on a regular basis, and the leadership avoided having to deal with anyone who might make waves.

My position made me a member of the bargaining committee, and we prepared to negotiate a contract last year. Days before the first meeting with the University, in the midst of what was then the still-unfolding budgetary crisis, the state-wide president (do you know who your union president is? did you vote for her?) suggested we take the university’s offer of a one-year extension of the current contract with no changes at all. This was presented as fait accompli at a meeting of the committee, and we voted unanimously to accept it.

In the aftermath of all of that, I became increasingly frustrated with how poorly the union represented its members, how shockingly little democracy was actually involved, how easily the state-wide leadership quashed any dissent, and how wholly it bought into the University’s antagonistic relationship while capitulating on a regular basis to the University’s interests. I was in the perfect position to do something about this, but I was not the individual to do it for a variety of reasons. Clearly, that is why I was put in the position to begin with. So I resigned, and as I did so, I urged various people to step in and do what I was unwilling to do. I’m not proud of all of this, but I do have the satisfaction of knowing that Berkeley’s current representatives are a force for agitation among the state-wide leadership, and I support them.

Now, the University really is a vicious negotiator. You will note that we are only now, in the last week of November, voting on a contract, while these negotiations began last Spring and the previous contract expired at the end of September. You probably heard something about the switching of “fees” for “tuition” and whether or not that would invalidate our guaranteed fee remissions, a well-timed announcement that now puts the union in the position of touting as a win what is actually a holding of the status quo. The bargaining committee is not made up of evil people, nor are they secretly trying to shore up the UC’s bottom line at our expense; I’m sure they really believe that this is the best contract they can get. But they are tired of the process, they have been skillfully manipulated by the University, and they are actively quashing efforts to allow debate among the actual membership of the union around this contract.

Another form that the anti-democratic nature of the union might take is the real possibility of fraud in the vote count. This text comes from a flyer that was being handed out today on Sproul plaza:

The UAW Elections Committee, made up of elected representatives from each campus, agreed on voting procedures that require each campus to submit voting tallies to the committee, after which all ballot boxes are sent to one place and a final tally is made. The totals of the campus tallies and the total tally are compared.

On the morning of November 30th, the chair of UAW Elections Committee announced she would be withholding the daily campus tallies from the rest of the Elections Committee. Further, the Chair refused to hold a conference call with committee members to discuss this last-minute change in voting procedure. This unilateral act violates the November 28th decision of our Elections Committee -- duly authorized by the Constitution and Bylaws of the union.

Call Fawn Huisman, chair of the Elections Committee and express your concern over this unilateral and arbitrary violation of democratic procedure and the constitution of the Union.

In the last few days, a new blog called "UAW for Sanity" has appeared and begun to push back against the folks advocating a NO vote. It purports to be a "grassroots" blog, but at least three of the five authors are members of the UAW joint council. Not that that makes their opinion irrelevant, but it certainly makes the idea that this constitutes some surge of "grassroots" outrage laughable. As @santacruztacean put it the other day, 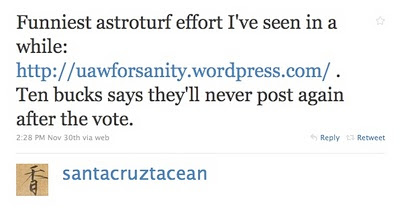 One final note: as of this moment, 946 people have pledged to vote NO. Last day of voting is Thursday. At Berkeley, you can vote at Sather Gate and North Gate from 8am - 4pm, and at Kroeber Hall from 10am - 2pm.

[Update 12/2]: More on the UAW's astroturf blog here. Also, an interesting recording of a confrontation at a polling station at UC Irvine is here. Paid UAW staffers (non-students) have been brought in to get people to approve the contract:

4 Paid and bias[ed] UAW Staffers were spotted on the Palo Verde (Graduate) Housing Bridge. Reports are that they were at the polling table and that one of them was “removed” and replaced by a less biased one.

Below, you may listen to the audio recording of the incident linked from the UC Rebel Radio Audio Archives. The louder voice at around 10:00 (and before) is the person operating the poll. He is a paid staffer, not a student. He talks at length to this graduate student about the contract, especially around 15:00, where he discusses what the ‘yes’ and ‘no’ would mean. He says things like “A ‘NO’ vote is not caring for childcare”. It is pretty fucked up.

At 16:20 Coral (a Union polling member) tells him he is out of line. Someone then text messages Fawn (UCI physics graduate, statewide elections committee person) to tell her this shit is fucking crazy. Someone tells Coral they want to put the recorder on the table. She then calls Fawn about this. Fawn shortly shows up to take over operating the poll.