US and Europe / Strategic and Tactical Differences

The recent wave of occupations and massive protests in the UK are incredibly inspiring for those of us in California who have been fighting the privatization of public education. There are some clear parallels, not only in terms of the economic and discursive forms the austerity measures take but also in the tactics being adopted and developed to challenge and combat them. But there are also significant differences.

In an essay published a couple weeks ago, Michael Hardt analyzed some of these differences. "Whereas in Britain, Italy, and other European countries students battle police in the streets and experiment with new means to protest such government actions," he writes, "there is a relative calm on U.S. campuses." What explains this calm? One relevant factor, he suggests, is that the movement toward privatization in the US has been much more gradual than in the UK. The broadest, biggest, and most intense protests in California took place in November 2009 when the UC Regents were voting to approve a 32 percent tuition hike; in the UK, parliament just voted in a 300 percent increase, and slashed the overall budget for higher education by some 80 percent. A second factor is the difficulty of national coordination, since the education policies vary from state to state.

But Hardt is most interested in the big picture, the roots of difference: "The most significant reason for less student activism in the United States, however, may derive from a much deeper national condition. The social value placed on education for all, especially higher education, has declined dramatically." Education is no longer a central mission of the US government as it was in the post-Sputnik era, and what Hardt (and Negri) identify as the shift toward "biopolitical production" has made the focus on hard sciences and engineering that dominated the industrial model less and less important:


University policies throughout the world have not kept pace with these changes. The private money that universities solicit to compensate for the decline in public funding is dedicated overwhelmingly to technical and scientific fields. The human sciences, which are increasingly relevant in the biopolitical economy, are deprived of funds and wither. In this case the student demands actually point in the direction of economic prosperity. The current student protests thus reconfirm a general rule of politics, that social struggles proceed and prefigure social development.

Hardt raises a number of questions that are clearly important for us to consider. In some ways, however, his broad vision obscures some of what I think are the most interesting differences at the micro-tactical level. Here I want to really briefly lay out two that I've been thinking about recently.

First, cops with guns. In this video from last week's protests in London, cops struggle to hold their own line as the "book bloc" of protesters attempts to push through using reinforced banners and shields in order to break out of the "kettle" where they're being kept against their will. In contrast, at the UC Regents' meeting at UCSF Mission Bay in November, the police used chemical weapons (pepper spray) and even drew guns to shut down protesters. What would demos look like here if the cops couldn't rely on such overwhelming firepower? How would we confront them? 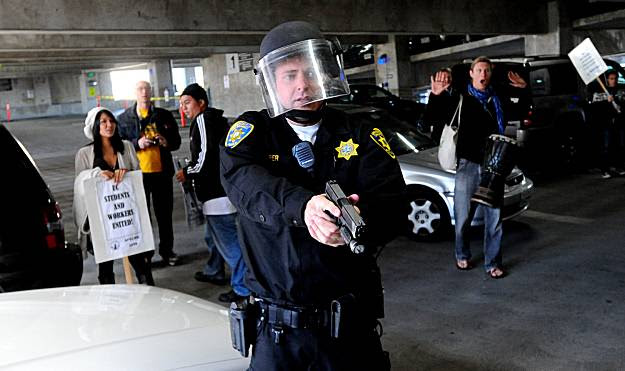 Second, private property law. Dozens of universities in the UK were occupied in November, and many of these occupations are still ongoing. University College London, for example, has been occupied for about three weeks now. It's inconceivable for an occupation to last that long in the US. Even "live week," the open occupation of Wheeler Hall at UC Berkeley that took place almost exactly a year ago, lasted just four or five days. Not only was there a heavy police presence the entire time, we've since learned through a public records dump that the administration was scheming to shut it down from the start. They were just waiting for an opening to send in the cops, which they eventually did, making 66 arrests. But the legal context is different in the UK. As Angus Johnston wrote last week,


Some two hundred students at University College London have been occupying the Wilkins Building on campus for the last two weeks in protest against planned funding cuts and fee hikes at Britain’s universities. On Thursday the university demanded that they leave.

In the US, the university’s next step would have been obvious — call in the cops. In California, student occupations are becoming a regular occurrence, and police evictions accompanied by mass arrests are almost inevitable.

But this isn’t the US.

In the UK, you can’t evict students who are peacefully occupying a campus building without a court order, and the university has in this case so far failed to get one. 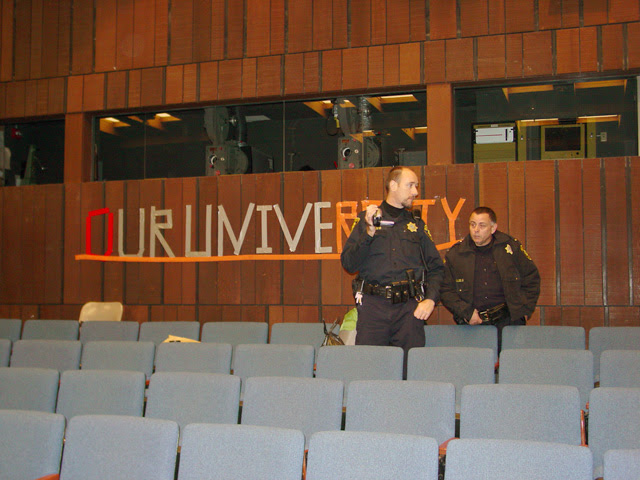 In comparison to the broad strokes of Hardt's brush, these examples may seem less significant. Obviously there are other critical differences -- for example, the strike culture that makes it possible to paralyze campuses in Puerto Rico, for example -- but the ones presented above are useful for thinking about horizons of possibility. Maybe what's at stake is the distinction between strategy and tactics. But sometimes this distinction gets blurry -- the normalization of cops with guns and the fetishization of private property shape the kinds of tactics we deploy and the kinds of violence we face in response. To some extent, they produce the field on which political action occurs. Actions or campaigns to push cops off campus or to disarm UCPD, for example, could significantly shift this ground and immediately add to the repertoire of tactics at our disposal. They won't turn California into London or Rome, but it certainly couldn't hurt.
Posted by d at 11:22 AM