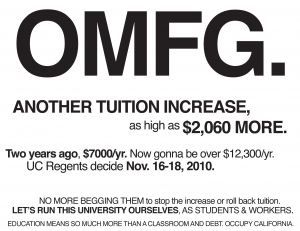 Earlier in the year, there was talk about a 20% fee increase in November, along with a number of student protests across the campuses. Now that we’re closer to the fee proposal being released, the fee increase will probably not be in the ballpark of 20% -- word has it that it’s in the low 10s or the single digits.

The fee hike will be announced later today. Stay tuned.