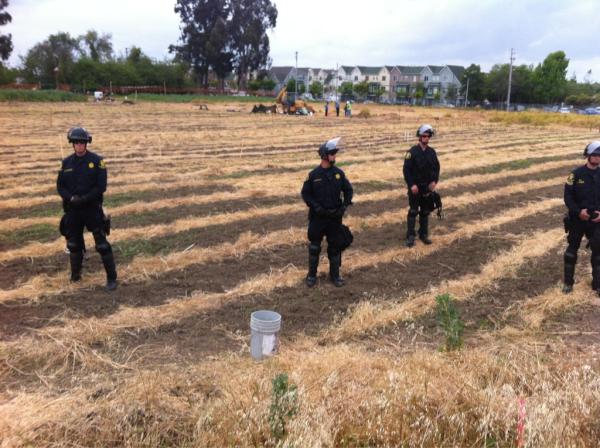 From Occupy the Farm:


Albany, CA - Well over 100 UCPD and Alameda County Sheriffs officers, armed with less-than-lethal impact-force projectiles, 36" batons, and pepper-ball guns, arrested nine people at the Gill Tract Farm near 7 AM on Monday morning. Of the nine that were arrested, two were watering plants on the agricultural land and seven were watching the police from San Pablo Avenue.

The Gill Tract Farmers Collective has called for a reconvergence at the Albany Community Center, 1249 Marin Ave., at 5 PM tomorrow.

More info and updates over at Hyphenated Republic. Journalist Susie Cagle (who took the photos below) confirms that as of a couple hours ago there have been 9 arrests. Arrestees are being taken to Santa Rita jail. The UC Berkeley administration has released a statement about the raid, declaring that "the involvement of law enforcement is required to secure our fundamental property rights and protect a core value that is an indivisible part of who we are: academic freedom." In other words, UCPD is the condition of possibility for academic freedom. 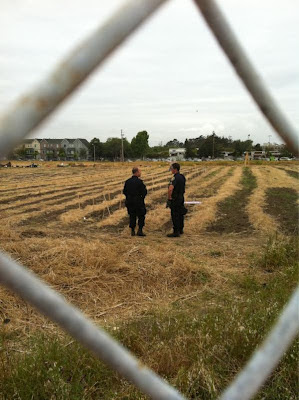 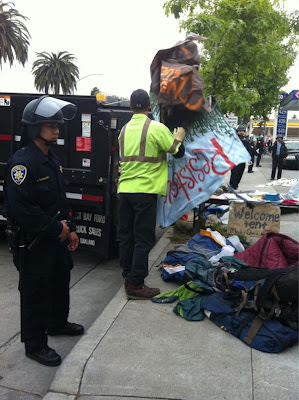