Protest, Policing, and the UC Regents' Committee on Finance 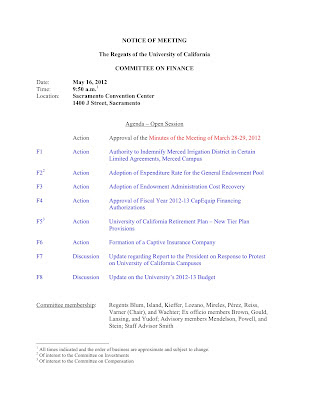 The UC Regents are having another meeting on May 16, and tuition hikes are once again on the table. According to the budget report [pdf] to the Committee on Finance, the Regents will discuss the possibility of raising tuition and fees by 6 percent for the fall 2012 semester as well as an additional, mid-year tuition hike "in the range of double digits" for spring 2013 if Governor Brown's tax proposal doesn't pass in November. Chris Newfield's analysis of the budget scenarios is a must read here.

But there's something on the Committee on Finance's agenda that appears at first glance to be strangely out of place. Nestled between discussions of expenditure rates for the general endowment pool and plans for the formation of a captive insurance agency, we find Discussion Item F7, titled "Update regarding Report to the President on Response to Protest on University of California Campuses."

This is a reference, of course, to the Robinson-Edley Report [pdf], which was released in draft form last week to great media fanfare. The text of the discussion item [pdf] for the Regents' meeting is more or less the Executive Summary of the report. Writing at the request of UC President Mark Yudof in the wake of the November 9 police riot at UC Berkeley, General Counsel Charles Robinson and Dean Christopher Edley were charged with generating a set of best policing practices for UC campuses to use in dealing with future protests. The infamous pepper-spraying incident at UC Davis the following week only intensified the report's urgency. Over the course of 50 recommendations (although the version for the Regents' meeting appears to contain only 48 -- it's not clear which two recommendations have been removed), it suggests that the issue at hand is essentially one of free speech. As the Executive Summary states,


This Report is premised on the belief that free expression, robust discourse, and vigorous debate over ideas and principles are essential to the mission of our University. The goal of this Report is to identify practices that will facilitate such expression — while also protecting the health and safety of our students, faculty, staff, police, and the general public. (1)

Joshua Clover has recently shown how the frame of rights and free speech represents a fundamental misrecognition about what is happening on UC campuses and around the world. According to this understanding, the sequence of events goes something like this: students protest, then police respond. Perhaps the police respond a little too hard, arresting a few too many protesters, using a little too much pepper spray. So the administration steps in and formulates a new set of policing practices to ensure that in the future this kind of excessive force isn't deployed. Here, the issue at hand is one of demarcating the limits of protest as speech, of regulating the proper relations between protesters and police.

In fact, as Clover points out, the sequence of events is very different. It begins not with students arbitrarily protesting, but with the administration developing and implementing austerity policies across the UC system -- raising tuition, cutting classes, firing workers, increasing out-of-state admissions, and so on, austerity's myriad manifestations within the particular context of the post-crisis university. These struggles are not rhetorical but material; they are about how the university is run, about what, under the technocratic directives of the UC administration, the university is coming to be. By displacing these struggles onto the terrain of speech, we unwittingly let the administration off the hook: "One suspects there will be some payouts to injured students, and that a cop or two will be pastured. And the matter will be tentatively resolved, despite the economic content remaining entirely unaddressed; thus, the administration wins by 'losing.'"

This is precisely what the Robinson-Edley report does. Without going into too much detail, it's worth looking at an example. One thing that jumps out in the report is the extent to which the authors see the problem as rooted at least in part in students' ignorance: "We also were struck by a more fundamental information gap," write the authors. "[M]ost members of our community know very little about our campus police departments" (23). Apparently, this is not for lack of opportunity. "At UC Santa Cruz, for example, the police department offers a quarter-long course titled 'Citizen Police Academy,' for up to twenty-five students, faculty, and staff. Class members gain a deep familiarity with the campus police department. In addition, on some of our campuses, the police make presentations at new student orientations. But these existing opportunities for students and other members of the University community to educate themselves about their campus police departments apparently have not satisfied the community’s desire for information" (24). Predictably, the report goes on to recommend more such classes, more opportunities for students to "become acquainted with the campus police agency" as well as "with the applicable rules for campus protest -- including rights and responsibilities, triggers for an administration or police response, the response option framework, and alternate modes for engaging with authorities" (26).

The objective is to transform struggles over privatization into a sort of choreographed dance between students and police, to minimize or obscure the work of the administration, and to avoid at all cost any disturbance of the material operations of the university. Despite the much-hyped statement in the Executive Summary that administrators and police will have to stop thinking primarily in terms of "the maintenance of order and adherence to rules and regulations," this order is ultimately upheld as fundamental. In response to concerns that arose from the UC Davis pepper-spraying incident, the report recommends not that pepper-spray should be eliminated but that "event response team’s guidelines, should specify that administrators will not authorize any physical police response against protesters non-aggressively linking arms unless the protesters were significantly interfering with the academic mission of the campus" (37). In the end, order must be maintained, the restructuring of the university must continue unabated.

Why, then, are protest and policing a concern of the UC Regents' Committee on Finance? No doubt some of the recommendations in the Robinson-Edley report will require some appropriation of funds to implement -- mainly the hiring and training of police officers (Recommendation Group 4) and the surveillance and monitoring of protest actions (Recommendation Group 7). But these will be minor expenses and anyway have little to do with UC finances at large. This apparently unlikely arrangement must be read as an acknowledgment, on the part of the UC's top managers, of what campus protests are really about. They know that the only thing standing in the way of their austerity policies, of their ever accelerating and increasingly desperate attempts to tie the university to the financial markets, student tuition, and debt, are the students and workers -- and occasionally faculty -- standing in their way, literally using their bodies to keep the machine from operating.

It could not be otherwise. At the UC today, protest and policing are inextricably a question of finance.
Posted by d at 12:12 PM