[Update from the comments, posted on 4/22 at 9:15am]: "on Thursday, 40 pissed-off people walked into the Dean's front office and sat and made their case until the Assistant Dean agreed to a meeting with Thomas for the following day, with his lawyer present. The following day, Thomas was reinstated at the university — this despite the rather instant dismissal and refusal to consider an appeal just a couple days before.

The Dean assures us this has nothing to do with the direct action. No, nothing at all." 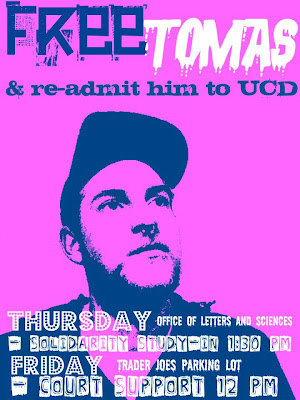 An update and call from our comrades at the Davis Antirepression Crew for a Solidarity Study-In at the Dean's Office.

A UC Davis undergraduate in art studio was arrested early Saturday morning, 17 March, in his dorm room, by members of both the UC Davis and City of Davis Police. He was charged with Felony Vandalism and held in jail over the weekend and into finals week; his school supplies, phone and computer were all confiscated. With no access to his contacts nor warning of the arrest, he was unable to contact legal representation. Incommunicado in jail, he was unable to take final exams, and was only bailed out (for $20,000) when concerned friends began looking for him after he had been missing for days. UC Davis Student Judicial Affairs, which initiated the warrant for his arrest, didn’t bother to notify his home department, his family, friends, or professors to let them know the student’s whereabouts.

Several weeks later, both Student Judicial Affairs and Student Housing threatened him with disciplinary measures including eviction and expulsion, in addition to the criminal charges they initiated through Yolo County District Attorney Jeff Reisig. The student, who entered UCD as a transfer student last fall, has since been expelled based on poor academic performance, on top of criminal charges that may carry a 3-4 year sentence and $10,000 fine. As a student prominently involved with Occupy UC Davis, arrested during the pepper spray incident on Nov. 18, 2011, these charges appear to be a means to intimidate and punish him for political activism.

The charges against this student-activist are in line with the ongoing and systematic police and legal repression of the Occupy movement. Threatening people with inflated or trumped-up charges, a familiar tactic in many vulnerable communities, is now increasingly wielded as a strategy to chill political dissent on campuses — a way of exacting punishment in jail time, legal expenses, and interference with other obligations before the opportunity for trial. “This is the new de facto regime of guilty until proven innocent, and it should be opposed by every decent person,” said Joshua Clover, a professor at Davis. The university News Service, which reports directly to Chancellor Katehi, has already expressed its enthusiasm for engaging “law enforcement to prosecute proven violations” — seeming to misunderstand the legal relation of trials, proof, and guilt almost entirely, with harmful consequences for students.

The Reynoso Task Force Report on the UCD Pepper Spray Incident just last week verified that the administration’s unfounded hysteria regarding the Occupy movement resulted in their extralegal use of force against student activists. Importantly, the Reynoso Report also underscored the need for campus authorities to handle student political protest through already established, appropriate channels; namely through the SJA and Student Affairs — and not by means of police and criminal charges.

We urge the UCD campus community and the general public to reject categorically the administration’s use of legal maneuvering to suppress political dissent.

Bring a cushion, 5,000 friends, your favorite textbook, and a colorful sign to the Office of Letters and Sciences! We're going to meet at the building's ground level entrance. If you can't attend this event, support Tomas at his arraignment this Friday.

FREE TOMAS! WE DEMAND HIS IMMEDIATE RE-ADMITTANCE!
Posted by d at 10:49 PM