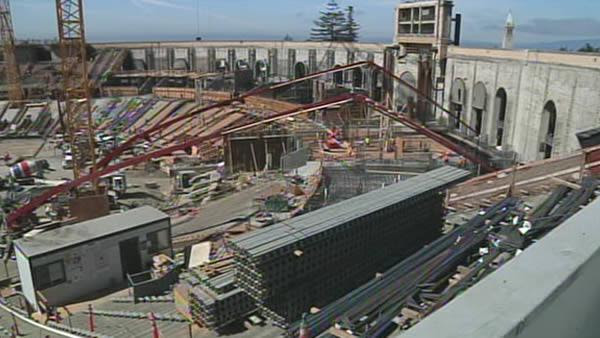 The Wall Street Journal reports on the UC Berkeley administration's disastrous plans for financing the renovation of the football stadium. In short, the brilliant idea was to raise $270 million from the sale of seats, presumably to its hyper-rich, 1-percent alumni. As one might expect, things didn't quite work out as our highly-paid financial managers imagined: only $31 million (about 11 percent of the total) was raised over a period of three years, leaving us about $240 million in the hole.

Wonder who's going to get stuck footing the bill...


Although its $321 million price tag would make it one of the most expensive renovations in college sports history, the university said the project would be funded privately, largely through long-term seat sales and naming rights.

But three years into the fund-raising effort, a projected $270 million from the sale of seats has failed to materialize. At the end of December, the school had collected only $31 million in the first three years of the sale. Now it has become clear that the university will have to borrow the vast majority of the money.

In recent interviews, university officials acknowledge that if revenue projections fall short and won't cover the bond payments, the shortfall "would have to come from campus."

The idea that money for the football stadium could come from campus funds, which include student fees, is an admission likely to stir outrage at a school that's already facing possible double-digit tuition increases. "It is disconcerting that the university may be gambling with student fees and other academic funds to cover a massive financial commitment for a football stadium," said Cal computer-science professor Brian Barsky.

In public pitches for the project starting in 2006, university officials talked about raising hundreds of millions through an "Endowment Seating Program" that was to endow all 29 of Cal's varsity sports and more yet by selling naming rights to various components of the stadium. The official name will remain Memorial in honor of war veterans. But the economic downturn hindered sales and by November 2010, [Sandy] Barbour [Cal's athletic director] had posted online a letter to fans saying she was "heartbroken that the program's intentions will, in all likelihood, not be fully realized."

The total bonded debt for the project, including the training center, will be $447 million. That's apparently an unprecedented amount of borrowing for a college-sports project, far above the $220 million that Minnesota borrowed to build a new stadium in 2009, the $200 million that Washington has borrowed for its stadium renovation and the $148 million that Michigan took out to add luxury seats that opened in 2010.