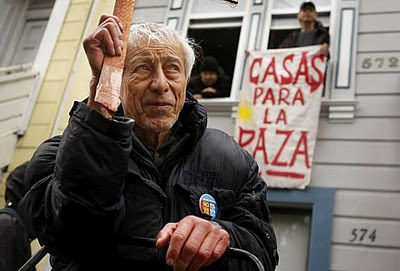 In 2008, José Morales was evicted from the house where he'd lived for 43 years. Today, José returned with a rally organized by Homes not Jails -- and the house was reoccupied.

Best paragraph in the Chronicle article is the last one:

About 5 p.m. Sunday, he said, police knocked on the door of the building and asked protesters how long they planned to stay. According to Gullicksen, they responded that they had no immediate plans to leave.

Another update (Monday 4/5): according to occupyca, the occupiers were evicted at about 1:30 pm today.
Posted by d at 7:41 PM