The Political Economy of Enrollment 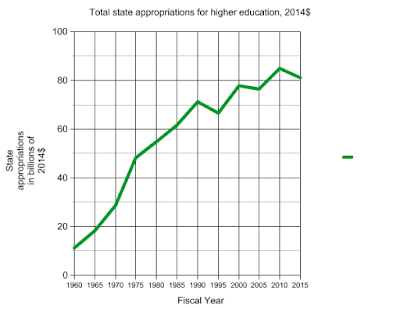 One the most important debates about the crisis of public higher education these days has to do with understanding the reasons for the restructuring of the public university, which is tied to everything from skyrocketing tuition and student debt to administrative corporatization. In very schematic terms, there are two answers: one focuses on state governments and budget cuts to public higher education, the other on university administrations and their profit-seeking protagonism. The way we choose to answer the question is politically important because it is part of what shapes our strategic and tactical response. If the state government is the primary actor, interventions will generally operate at the level of electoral politics, either through supporting candidates, lobbying, or more generally “making a case” for supporting public education. In contrast, if university administrations are the primary actors, interventions will generally occur more locally, at the level of the campus or system, through actions like rallies, walkouts, strikes, occupations, and so on. Of course, things aren’t always as clear cut as this dichotomy suggests. But in a context where austerity is so visible and “politics” is largely seen as something politicians do, it’s important to remember the active role of administrators in restructuring their universities into the ground.

These debates are organized in part by how the numbers are calculated. Take the recent and controversial New York Times essay by Paul Campos, which argued counterintuitively that government support for higher education has actually increased, not declined, since the 1960s. He claimed that the real reason tuition has gone up so much is not budget cuts but the skyrocketing expenditures that channel money into administrative bloat and building construction. Not surprisingly, the piece generated a quick response from folks who see state funding as the key. A number of these critiques turned on the claim that he was using the wrong metric—rather than aggregate support for higher education, he should instead be using per-student funding:


Overall, public spending on higher education has, as Campos argues, risen dramatically over the long term. But so have the number of Americans attending college. When administrators say that government support is shrinking, what they usually mean is that per student appropriations have fallen. This is a crucial point. Someone has to foot the bill for each and every undergraduate's education. If taxpayers don't do it, then families have to pick up the slack themselves.

And sure enough, the administrators did in fact say exactly that. Nathan Brostrom, the Chief Financial Officer of the University of California system (and former JP Morgan exec), wrote a letter to the Times criticizing the Campos piece in which he made exactly this argument:


Mr. Campos blames administrative bloat and high salaries; I disagree. The State of California, for example, funds the University of California system at the same level as it did in 1999—even though today we enroll 83,000 more students and have one more campus.

The per-student argument makes mathematical sense. It’s obvious that equal funding / more students = less funding per student. State funding per student has obviously declined. And yet... using this metric as the gold standard seems to miss something important about the function of the student at the public university today.

When higher education was relatively fully funded by the state—when tuition was zero—the per-student metric made sense. Under the Master Plan, state funding for the UC was pegged to in-state enrollment. In that context, enrollment served as a reasonable way to quantify the “public good” produced by state support for higher education. Rising enrollment theoretically meant more trained workers who could be funneled into the labor market. The massive expansion of the infrastructure of public higher education during the 1960s, when not only new buildings but entirely new campuses were constructed, was justified in exactly these terms.

Over the last three decades, however, these enrollment quotas have gradually been removed. Little remains, likewise, of the idea of higher education as a “public good.” What is the function of the student today? It depends who you ask. Teachers see (or should see) students as critical, thinking subjects, who they can learn with and from. But administrators see students as dollar signs. These days, students are little more than revenue streams that show up on credit reports as potential liquidity and favorable interest rates. We all understand that tuition increases are an attempt by university administrations to bring in more revenue. But enrollment increases do the same thing. And this actually shouldn’t be all that controversial, since we already talk about out-of-state enrollment in exactly this way. But is it the case for in-state enrollment as well?

Last week, the UC regents approved an increase in out-of-state tuition by 8 percent per year for the next 5 years. Next year, out-of-state students will pay an extra $1,830 in tuition. During the meeting, Brostrom himself pointed out that the UC could accommodate 10,000 more undergraduate students if the state provided additional funding for them. He also suggested that the administration would lobby the state for these funds. The CFO’s language frames increased enrollment as a public good, a drag on the university’s resources, certainly, but something that the state should do, as the state once did. What he doesn’t say, however, is that enrolling 10,000 more in-state undergrads (at 2015-2016 tuition levels) would provide the university with an extra $112.2 million per year. And even if we assume those 83,000 extra tuition-paying students are all California residents, that’s nearly a billion extra dollars in gross annual revenue over 1999 levels.

Now, the UC administration claims that the cost of instruction is greater than in-state tuition. But these claims are at best debatable and at worst simply not credible, because as Chris Newfield and Bob Samuels have shown they include research and other non-educational expenses in order to inflate the alleged instructional cost. (It's gotten to the point that, as Samuels observes, the administration literally claims it costs $342,500 to educate one medical student for one year.) According to Newfield, a more reasonable estimate of the cost of instruction for undergraduates would be somewhere between 40-80 percent of the administration’s figures. Even using the higher rate, then, the administration still generates a net profit for every extra student they bring in.

Per-student funding can be a useful metric for clarifying certain trends, but it’s equally important to understand the things it makes invisible. University administrators make decisions about enrollment not out of some abstract interest in the “public good” but rather out of a very concrete interest in the bottom line. Enrollment should not be treated as a given but as a variable that may shift as executives and financial officers seek to optimize revenue flows. In this context, using per-student funding may obscure the function of the student today while deflecting antagonism toward the state.
Posted by d at 8:33 AM