A Communiqué from the UCSC Occupation of Humanities 2 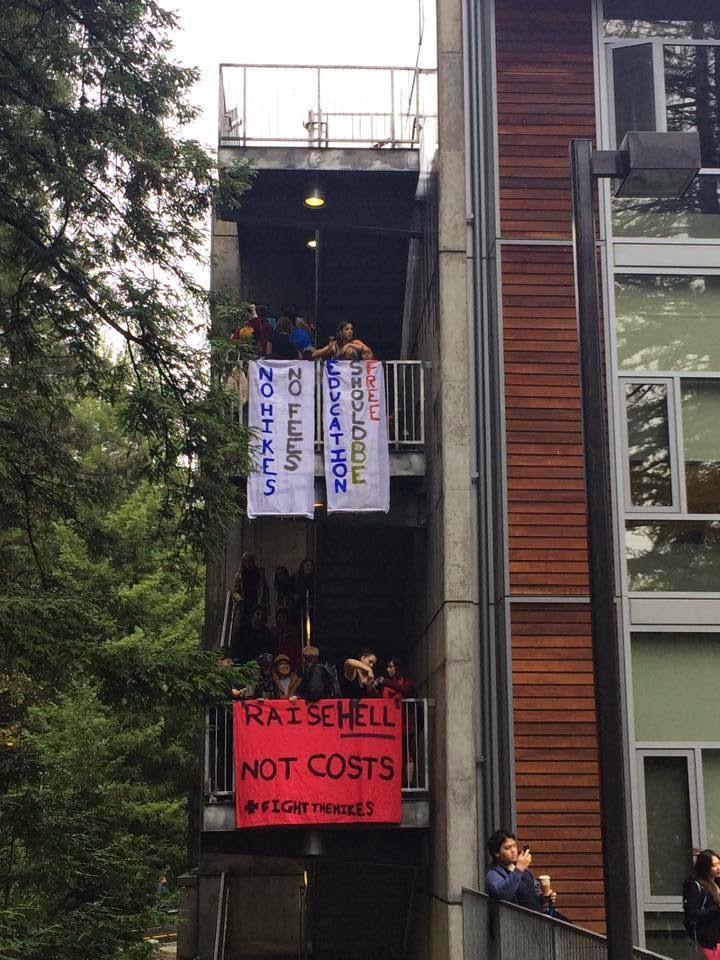 The University of California was once a tuition-free and public institution. Now the students are facing yet another tuition hike. The most recent attempt to raise tuition in 2009 was successfully frozen by the courageous and necessary action of students, yet this week, the UC Regents have approved a 5% tuition increase each year for the next five years. This is in addition to the numerous increases that have occurred since the new millennium which amount to what will now be a 500% increase by 2020. Governors and legislatures have come and gone, and have continually spouted rhetoric without taking any action.

In addition to tuition increases, students face larger class sizes, fewer classes, cuts to student services, and ultimately, are paying more for less education. Of course, these measures disproportionately affects those already marginalized--women, students of color, queer students, and many more. A private business parades in the mask of a public university.

All of these issues and more are a direct result of the failed leadership of the UC Regents, a ruling junta appointed by the governor—yet rebuked in this move even by him!

Privatization threatens the promise of education for all. With this most recent tuition hike, UC
students are being crushed; this is just one symptom of a global effort to privatize everything. Our
water, lands and studies are being held hostage to further benefit those at the top of a horrifying
capitalist economy of accumulation. It extends far beyond the university, from the extraction of
natural resources, to the oppression and exploitation of laborers. We are saddled with obligations to
work and incur debts at the expense of our humanity and the habitat we depend on. As students,
our future labor is put on lien for the privilege of attending a once free, now mediocre, university.

The hypocrisy we face is astounding: the Regents gave 20% raises to a few campus Chancellors just
weeks before hoisting more debt onto vulnerable students. Regent Bonnie Ress said they were
correcting an “injustice” by bumping people up from $360,000 to $383,000. This would be
laughable if it weren’t so disgusting. Never mind that the chancellors are already in the top half
percent of income earners in the United States. But with ten CEOs, four corporate lawyers, two
investment bankers and merely one student on the board of Regents, it is not surprising that the
priorities of this institution are skewed towards the interests of those at the top.

For all these reasons, we are occupying the Humanities 2 building at UC Santa Cruz. We are using
the space to do many things: to think, to strategize, to finally meet the fellow students we sit next to
every day. Most of all, however, we are simply inhabiting a space that is ours in a world where
nothing seems to be for us.

The students here are fed up, but we have not given up hope on one another, and we have not given
up hope on you. This message is intended for our fellow students here at UCSC, but it is also for
everyone else: we want to hear from alumni; from parents; from the people in our communities;
from our fellow students at other UCs; from our young comrades in elementary, middle and high
schools; from the workers and teachers who make this university run. We may only be in this
building temporarily, but we want to build something bigger, something lasting, and we want all of
you to be a part of it.

The Regents have passed their tuition hike, but this is far from over. We are calling on our allies to
help us grow: more occupations will surely follow (we don’t know who plans them!), and more
strikes, more disrupted meetings, more barricades, more students and allies in the street. All of this
not to return to the past, but to build a new future.

We will be unmanageable until such time as there are no managers—until the Regents, tuition, and privatization are washed away in a wave of democracy.