Undergraduate students are workers in training.  Not only does university education train and sift students into particular lines of work, but the rising costs of education and associated student debt burdens also lock students into futures defined by waged work.  Undergraduate students are not simply oriented toward work they will have to perform in the future though; they also work for wages at the same time as they are enrolled.  Students have to pay for their food and lodging, and often hold down multiple, part-time jobs in order to do so, including food service, clerical, and academic jobs.  Some of this work occurs on campus, meaning that university administrators are not simply managing students' educational experience, but also managing their lives as workers.  Work on campus is often minimally compensated.  And, while some undergraduate jobs are covered by collective bargaining agreements, most of these jobs are non-union.  Students' lives are thus defined by often impossible attempts to juggle work performed for credit and work performed for (minimal) pay.

At UC Berkeley, a conflict is currently taking place that will determine how work at one of the primary places of undergraduate employment on campus will be defined, whether this work will be compensated, and whether it will be covered by a collective bargaining agreement.  The stakes of this conflict are very high: if university management prevails, they will have taken a step toward normalizing unwaged academic work, toward devaluing all academic labor, and toward diminishing the quality of academic support all UC students can expect.

The Student Learning Center (SLC) at UC Berkeley employs over 250 undergraduates as tutors, who provide support for other students around writing assignments, math problem sets, and other academic activities.  Tutors are assigned to particular tutees, facilitate group learning activities, and also work shifts at the SLC, where they help students who drop in to the Center with questions about a particular assignment.  The image below offers a sense of the scale of this work: on most days, all the tables in the SLC are filled with tutors offering support to tutees. 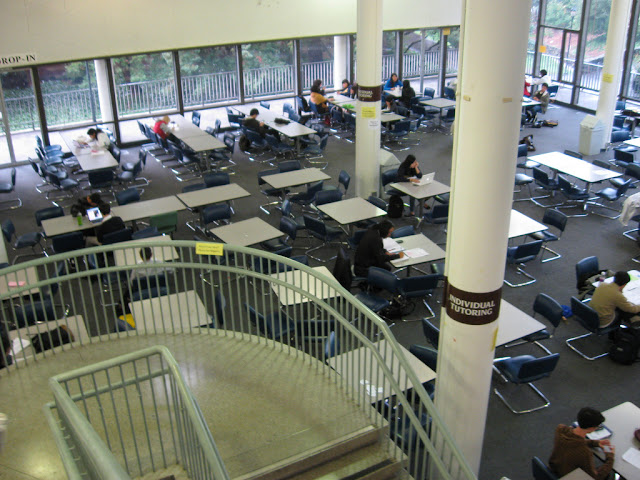 While university administrators have refused to provide any data on employment patterns at the SLC, anecdotally we know that in recent years -- following local austerity measures -- SLC administrators have begun to hire a significant percentage of tutors for unpaid, "practicum" positions.  Students seeking employment at the SLC are made to fill out an application form where they list their previous experience and other job-related qualifications.  The form then asks them to check boxes indicating whether they would be willing to work in paid and/or unpaid positions at the SLC.  If they check both boxes, applicants can expect to be told after their interview that no more paid positions are available, and that they are being offered an unpaid, "practicum" position, where they will tutor for four or five hours per week, and take a pedagogy seminar as well for a couple hours each week.  It has gotten to the point where tutors see these unpaid positions as a kind of required internship, or unwaged training period, to be performed for a semester before they have any chance of working for pay at the SLC.

All tutoring work throughout the UCs is covered by the collective bargaining agreement negotiated two years ago by the University and the UC Student-Worker Union (UAW 2865).  Thus, UC Berkeley's move toward what is essentially an unpaid internship program at the SLC undercuts the Recognition clause of the UAW 2865 contract, which stipulates that all tutors will be represented by the union and will be entitled to payment and workplace protections outlined within the other articles of the contract.  Given this clear and systemic violation of the contract, a couple of union head stewards, working together with a group of unwaged tutors, filed a grievance with UC labor relations a few months ago, challenging the practice of hiring unpaid tutors at the SLC.

The grievance is entering into its final stage, after which -- assuming the University continues to deny our claim -- the union would be entitled to appeal to third-party arbitration.  Now is an important time to put pressure on University administrators to adequately fund the SLC and to end the hyper-exploitative practice of running the SLC on unwaged labor.  The tutors and head stewards working on this grievance have been organizing on the ground, have put together a petition and have been publicizing the grievance.  If you haven't yet, please sign the petition calling on university administrators to fully fund the SLC and to pay all tutors for their work.

Given the economic stakes of this grievance, those of us involved in pursuing it assumed that university administrators would deny our claim on whatever semi-plausible ground they could find, and that, barring concerted action by other students and workers at and beyond the UC, little would change for the better at the SLC.  Nevertheless, the particular arguments administrators have made throughout the grievance process are worth considering in some detail, as they indicate much about how university administrators view student workers and the labor we perform, as well as their plans for remaking the university in a time of austerity.

The university's written response to the union's grievance, along with the union's appeals, can all be viewed below.  In denying the union's grievance, the university argues that, for a variety of reasons, "practicum" tutoring is essentially different than waged tutoring.  They claim that practicum tutoring work is tailored to the educational needs of the practicum students, rather than being determined by the learning needs of the tutees; that practicum tutoring involves simpler and more introductory work than that which is performed for money; and that practicum tutoring fulfills a requirement for the education minor, meaning that it shouldn't be thought of as job training.  As noted in the union's appeal letter, many of the university's claims do not square with the experience of tutors currently working in the unpaid, "practicum" positions: according to them, practicum tutors perform the same variety of work as other tutors, have similarly rigid work schedules, and are mostly not education minors, meaning that the practicum course fulfills no educational requirements for them.

The university's argument that the management of "practicum" tutoring is fundamentally oriented toward the educational development of the tutor/student, rather than the needs of the tutee, is particularly revealing, and troubling.  It suggests that the university would like unwaged tutors to think of the labor they perform over the course of the semester as a kind of internship, through which they gain valuable experience that they can use in the future.  The university's attempt to redefine tutoring work as useful experience is largely consistent with broader economic transformations of recent years, where decent-paying jobs are being replaced by unwaged internships and where those seeking employment are increasingly told that they must gain experience by performing unwaged work in order to be considered for highly-competitive, waged positions.  In this sense, the university's attempt to redefine tutoring work as useful experience is relatively consistent with the broader discursive and material transformations described by Ross Perlin in Intern Nation.

There are a couple aspects of the situation at the SLC, and of the university's response to the union's grievance, that are particularly pernicious though, and that stand out even against this broader context of workers' increasing exploitation through internship-based labor.  The first is that, in redefining unwaged tutoring as educational experience, university administrators not only normalize unwaged work, but they also normalize the imposition of techniques of labor discipline within the classroom, potentially setting the groundwork for a more disciplinary, regimented learning experience throughout the university (which could accompany a move to digitally-mediated courses).  In the union's grievance, we note all of the ways that unwaged "practicum" tutors are disciplined like employees, from being required to make up hours at the SLC if they are more than 15 minutes late to being forced to fill out time-sheets, like the one pictured here. 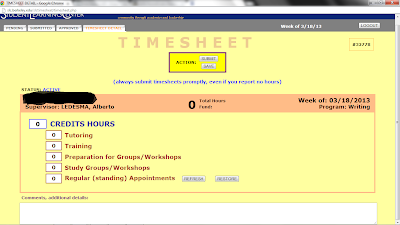 Responding to these observations, the university mocks our use of the term "work discipline," arguing that time-sheets and other forms of supervision and management can equally be considered "class assignment discipline."  Perhaps so, but only in a world where courses are managed in a way that is indistinguishable from the management of workplaces, and where the relations between instructors and students have been stripped of any traces of mutuality, collaborative decision-making, solidarity, and improvisation, and remade along the lines of the Fordist boss/worker (or machine/worker) relation.  It's worth asking whether those politicians and administrators, including Governor Brown and President Yudof, who are pushing to expand online-based classes -- where learning follows a predetermined track, and where students are evaluated based on narrowly quantitative criteria -- have such a remaking of instructor/student relations in mind as well.

Finally, by insisting that unwaged tutoring work is merely educational experience, university administrators encourage tutors to view their tutees in an instrumental light.  Tutors aren't working in order to support tutees or to provide a critical educational service on campus; rather, according to university administrators, "the primary purpose of the practica courses is the instruction and development of the practicum students; their tutees' assistance is a corollary."  This instrumentalization of tutees is the flip side of the same coin as the imposition of workplace discipline within the classroom, discussed above.  In order to manage students the way a boss manages workers, an instructor has to be made to view her or his students instrumentally, as objects to be controlled or treated with disregard, rather than as subjects with whom the instructor collaboratively makes a situation of autonomous learning.  If unwaged tutors are being trained through the practicum courses they are taking, it seems that university administrators understand part of that training to involve getting used to treating students instrumentally.

The arguments made in the university's response to the union's grievance against wage theft at the SLC thus reveal how much our administrators devalue academic work and perhaps as well how they envision the remaking of university life in a time of austerity.  But, as indicated by recent mass teach-outs, classroom presentations on privatization, walkouts against fee hikes, occupations, and open university projects, administrators haven't yet successfully instrumentalized and disciplined university life.  We still use the time we spend together in classrooms and tutoring centers to talk about what's happening to our university; to think collaboratively about how our lives as students and workers could be different; and to plan actions where we put into practice alternative modes of learning and living together.  In recent years, students and workers at the UCs have been acting in solidarity to establish and maintain situations of autonomous learning and to fight the exploitation of university workers and students.

Please stand up against the hyper-exploitation of unwaged tutors.  Sign the petition calling on university administrators to fully fund the SLC and to pay all tutors for their labor.


Union Appeal of University Response, tutor grievance
Posted by a at 5:55 PM