BP and UCPD Off Campus!

Cross-posted from BP Off Campus . . . 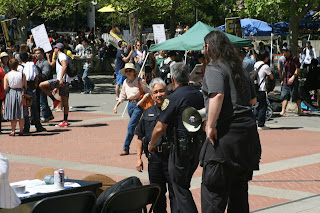 [On] April 10th 2013, members of Occupy Cal's UC Berkeley student group Open University reserved the world-renown Sproul Steps to launch the new "BP Off Campus" campaign. (...) The latest venture of Occupy Cal, the bpoffcampus campaign has been been focused on the greatest privatization scheme on the #1 Public University, which is British Petroleum's $500 million dollar deal with UC Berkeley regarding biofuel research at the EBI (Energy Biosciences Institute). Briefly, this deal is at best, a greenwashing scam for one of the worlds dirtiest corporations, but more troubling is the precedent that Big Oil can buy their way in and dictate education and research at a public institution. Please read more about it here.

Though Occupy Cal doesn't boast the numbers it once had . . . the UC Administration and their lackey thugs in blue, the UCPD, are still gravely concerned, because they know they've been robbing students and the public at large for years, and a sustained student movement on campus would expose their corruption and sink them. That's the reason for the continued authoritarianism against student protesters like Occupy Cal. We aren’t content with one-day “Day of Action” rallies, tepid measures passed in student governments, stalled ballot reforms, etc; no, occupying space; be it Sproul Steps, the commons in front of city hall, classrooms, administration buildings, farms, libraries: we’ve determined it's the best way forward, as this strategy has been the main source of student activism victories in the past. Why else would the UC Berkeley admins send in armed thugs to break up a teach-in about biofuels, in a room that was properly reserved?! [The teach-in took place on February 16, 2013 --ed. note] 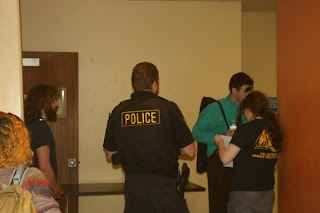 Fast-forward to . . . April 10, we set up our table in our officially reserved space without any trouble, but as soon as our famous Occupy Cal heart-signs came out . . . 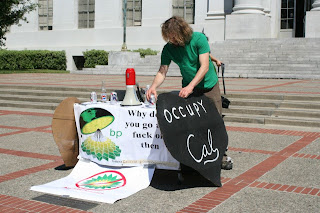 . . . the police started to swarm: more UCPD showed up, said some Sproul regular tablers, than had in months.  The threat of a radical movement will do that. 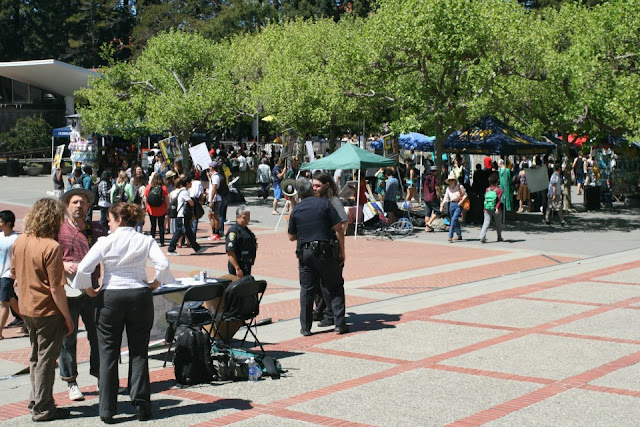 The UCPD told us we had to take our table down and leave immediately, to which we responded, we reserved the spot as a student group. They replied "We'll check on that," to which we said: "Why don't you check before you start making illegal demands?" The UCPD came back later, with their tail between their legs, admitting that we did in fact have the right to be there; though if he got the order to take the bullhorn, he'd snatch it right from our hands. "Why don't you just follow orders?" we dared, holding the bullhorn out. "Why don't you just follow orders!" So they deployed a new strategy, bring out the Student Group Administrator (the woman in the white blouse in the above photo) to harass us with spurious regulations, that seem to have been made up on the spot. 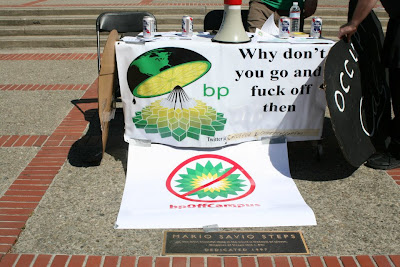 We had a sign, (as part of our protest that we jumped through hoops to make sure we were playing by the "rules" in our temporary "Free Speech Zone"), that told BP to "Fuck Off." After all, why we should be overly polite to a corporation that has a long history of lying, cheating, stealing, polluting and murdering? UCPD and the administration connived and concluded that saying the word "fuck" was fine, but having the word "fuck" on a sign was illegal, and we needed to immediately take the sign down. We asked her: "Are you aware of where you are standing?" 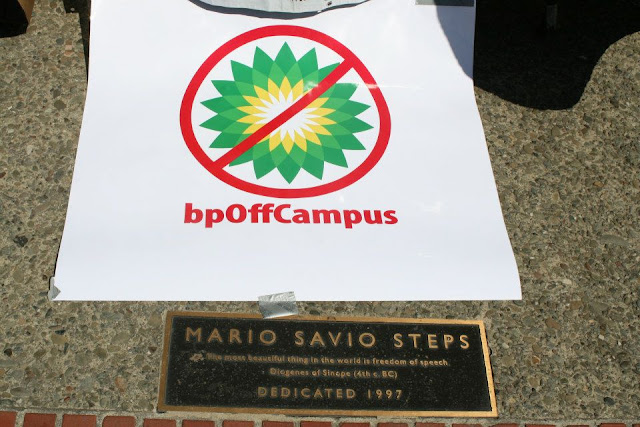 Yes, we were on the Mario Savio Steps, where the FREE SPEECH MOVEMENT was launched.

The Admin insisted. We replied, "This sign isn't going down. Are you prepared for a PR disaster?" She continued to insist. We wanted to see the documentation of this rule, as we had never heard of such of thing (and having many, many protests over the years with signs that said "Fuck" on them with no incident) and our scanning of the "rulebook" found no such policy. Incredibly, this UC Berkeley official said it wasn't her responsibility to show us the rule in writing; could we show her the rule where we had the right to have a sign with profanity? UC Berkeley 2013 ladies and gentlemen! "How about the 1st Amendment of the fucking US Constitution" was the obvious answer.

The action wrapped up without any further major incidents, and it was one of the better Sproul actions in over a year with many new students actually stopping by and getting informed and involved. Which is noteworthy, considering how modern UCB campus culture is for students to ignore the dozens of tables and groups handing out flyers at Sproul Plaza and walk through as quickly as possible. Please spread the word of our campaign and our website bpoffcampus.org to your friends and networks. And please consider getting involved!

This campaign isn’t limited in scope to just the University of California Berkeley. There are overarching and interconnected causes of social justice, human rights, environmental activism, quality education for all, and ending the drug war and the prison industrial complex (just to new a few, broadly) are all within the vision @bpoffcampus. This campaign is a unique opportunity as a launching off point for all of these issues and more. Why? Activist goals can be achieved and demands can be met on campus with direct action in ways that CAN NOT be done by appealing to Sacramento or Washington DC. And even if you are not a student, the University of California belongs to ALL OF US Californians: we must take it back! The time is now!

With broad consensus of the world’s top scientists that climate change caused by excessive fossil fuel consumption uncheck will cause mass global extinctions, and the immediacy of new oil spills and pipeline bursts occurring virtually every week, action must be taken immediately to get Big Oil out of our colleges and out of our lives. We must expose the BP/EBI deal at UC Berkeley for the greenwashing scheme and privatization scam that it is, and kick the corrupt, lying, thieving, polluting, and yes, murdering corporation British Petroleum out now!
Posted by d at 9:31 AM