From the perspective of those who govern the University of California, all has not been going according to plan.

There was the logo fiasco last fall, for one, which involved a series of biting news stories in national publications and concluded with a grudging, manifestly bitter concession statement from Daniel Dooley, one of UC's ten vice presidents.  It was evidently difficult to defend a logo that looked at once like a toilet bowl, an internet refresh icon, and a sex act.  But the logo redesign is only one of a number of issues on which the administration has recently been forced to retreat; the others have been more consequential.

At the UC Regents' meeting last month, President Yudof declared that "undergraduate tuition increases are largely off the table."  Given Yudof's previous positions and actions as President, his recent declaration that further fee hikes almost certainly won't be happening anytime soon is striking.

In the summer of 2009, following sharp reductions in the State's contribution to the UCs, the Regents gave President Yudof emergency powers, which he used to impose furloughs on staff and faculty, to fire approximately two thousand workers throughout the UC system, and to initiate a 32% undergraduate fee hike.  These regressive transformations spurred the first round of recent anti-privatization protest at the UCs: during the fall of 2009, a series of multi-sectoral walkouts, street demonstrations, and building occupations took shape on campuses across the state.  While this wave of opposition resulted in the rehiring of a few previously laid-off workers, and spurred then Governor Schwarzenegger to put a bit more money into the UCs, it did not meaningfully interrupt President Yudof and the Regents' push for a more privatized university -- a university where high student tuition rates help fund, free of state oversight, the construction of new biotechnology and energy research laboratories, sporting facilities, administrative offices, and high-rent dormitories, as well as the expansion of upper management layers and the growth of executive salaries and bonuses.

While Yudof and the Regents never attempted, following the Fall of 2009, a fee hike as drastic as the 32% increase they'd passed that year, they nevertheless kept up a steady march of 6%, 8%, and 10% fee hikes in subsequent years, such that, by the Fall of 2011, undergraduate in-state tuition had reached $12,200 (up from $3,800 in 2003).  Then, in an attempt to make inevitable another four years of fee hikes, President Yudof proposed in the Fall of 2011 a multi-year financial plan that included annual fee hikes of between 8 and 16 percent, to be determined by the level of State funding -- a plan that could have brought undergraduate tuition to $22,000 by 2015.

It was in this context, which happened to coincide with the emergence of the Occupy movement in the US, that another round of mass protest at the UCs took shape.  Campus-based occupy encampments and assemblies emerged at Davis, Berkeley, Santa Cruz, Riverside, Irvine, and Los Angeles.  Those participating in occupy events at the UCs tended to pick up and expand upon the critiques of ballooning student debt that were being articulated by the wider Occupy movement -- critiques that worked to link our local opposition to fee hikes with broader social and economic dynamics and impasses.

The severe, if also everyday, forms of police violence carried out against occupy activists from New York to Oakland were mirrored as well at the UCs -- students and professors at Berkeley were struck repeatedly in the ribs with batons, those at Davis were shot with pepper spray while seated on the quad, and those at Riverside were hit with rubber bullets.  These moments of state violence were shocking, though they weren't entirely dissimilar from the acts of violence that the UC Police Department had carried out against student protesters from 2009 through 2011.  It was only in the context of the Occupy movement -- where livestreaming was ubiquitous, and where a practice of mobilizing in response to instances of police violence had emerged -- that these acts of violence set off radiating outrage and strike actions, and thus brought about the thorough delegitimization of UC administrators and police officers.

At UC Berkeley, for example, the campus with which I am most familiar, not only did the police violence of November 9th compel students and professors to cancel classes and assemble on Sproul Plaza during the evening of November 15th -- composing the largest wildcat strike at Berkeley since the Third World Liberation Front strike in 1969 -- the violence also forced the previously moribund Academic Senate to pass, during a well-attended special session on November 28, resolutions condemning the Berkeley Chancellors and calling for significant changes in police protocols on campus.

While the occupy movement on UC campuses, like the broader occupy movement, lost some momentum through the spring of 2012, a series of demonstrations and marches, including a multi-week direct action to shut down a US Bank branch at UC Davis, a four-day march from Oakland to Sacramento, and an occupation of the State Capitol building in early March, kept pressure on university administrators and state politicians up through the summer of 2012.  This was the moment when Governor Jerry Brown compromised with the advocates of a Millionaire's Tax to formulate what would become Proposition 30, and when the Regents agreed that, if a certain percentage of the tax revenues generated by Prop. 30 were directed to the University of California, they would freeze undergraduate tuition rates.  While these were partial and uncertain victories -- the watered-down proposition very well could have been defeated -- in retrospect, this moment appears as a significant turning point: this was when President Yudof's push for indefinite tuition increases ground to a halt.

Some indication of the degree to which recent protests and their aftermaths have rattled and delegitimized those who govern the UCs can be found in the subsequent resignations of four prominent administration and police figures: President Mark Yudof, Berkeley Chancellor Robert Birgeneau, Berkeley Police Chief Mitch Celaya, and Davis Police Chief Annette Spicuzza.  While only Spicuzza's resignation was accompanied by an explicit concession of wrongdoing, and therefore it's theoretically possible that the other resignations were unrelated to recent protests and their repression, the timing and distribution of the resignations would suggest otherwise.

When considered in the context of the Berkeley Academic Senate's vote to condemn Chancellor Birgeneau and to call for changes in police practice, the resignations of Birgeneau and Celaya, as well as the recent hiring of Nicholas Dirks, appear as attempts by those who govern the UCs to recapture faculty loyalty, or at least to hold off further significant ruptures between the faculty and upper administration at Berkeley.  Anecdotally, it seems that Dirks enjoys the trust of most of the professors who publicly broke with Birgeneau in the fall of 2011.  So, even though Vice-Chancellor Breslauer -- who had been delegated authority to make decisions for Birgeneau on November 9 -- remains in his position [Update; 5/13/13: Breslauer announced in April that he will retire next fall], and even though the UCPD remains armed and substantially unreformed, it seems that members of the faculty are at least willing to give the new campus leadership the benefit of the doubt, meaning that they aren't at the moment likely to provide much support to those inclined to push for the disarming or disbanding of UCPD, or for the expansion of student and worker control of university spaces and priorities.  A pacified faculty would make it harder for campus unions to win significant concessions from management in upcoming contract negotiations -- negotiations that, if successful, could provide wage and benefit gains for workers and students, as well as class size reductions and a check on the proposed expansion of online education at the UCs.

While those who govern the State and the University of California appear to have at least temporarily conceded on the issue of student tuition, they are simultaneously intensifying their efforts to limit the power of campus workers and to cut non-managerial labor costs at the UCs.

At UC Berkeley, staff positions are being eliminated through attrition, while a few hundred workers will likely be relocated to a building on the far side of the city, which would damage institutional memory and weaken the relationships amongst staff members and between staff and departmental faculty.  Management is also pushing, so far with some success, a two-tier pension plan, which could produce resentment amongst newer workers towards their more senior colleagues, and thus similarly weaken forms of solidarity between campus employees.

Moreover, when considered in the context of labor/management antagonisms, the recent push by the Governor and the Regents for online-mediated instruction and student support appears as an attempt to expand class sizes and to outsource work that had been performed by unionized graduate students and clerical workers to non-unionized labor (as is already happening at San Jose State University, through their partnership with the online instruction company Udacity).  While the full-scale imposition of online education at the UCs doesn't seem imminent, Dean Edley and others have signalled some longer term plans in this area, which, if implemented, could have the effect of intensifying race and class stratifications in the UCs (creating a situation where working class students of color were concentrated in online classes and on campuses facing severe cuts to departmental budgets and graduate programs, while being increasingly excluded from relatively unaffected flagship campuses).

Despite the fact that UC administrators seem generally to have shifted their focus away from making students pay more for their education, and towards shoring up their support amongst members of the faculty and weakening the power of organized labor on campus through speedup, downsizing, and automation, recent moves by the administration around the UC Student Health Insurance Plan could result in what is effectively a new fee increase for graduate and undergraduate students.

Partly in response to a campaign by the Student-Worker's Union (UAW 2865) for the elimination of caps on lifesaving care and for free preventative pre-natal care -- reforms which would bring UC SHIP more in line with the regulations of the Affordable Care Act -- management has initiated a push to raise SHIP fees for all students covered by the plan.  They are claiming that UC SHIP has been operating at an annual deficit of around $20 million, and that fee increases are therefore urgent and inevitable.  This despite the fact that the UC medical centers are earning over $900 million in annual profits -- profits that could be used to help fund the insurance plan.  In a report recently delivered to the graduate assembly, outgoing President Yudof proposed student health insurance fee increases of up to 70% over the next three years -- increases that would amount to approximately $1,500 per person.  While the administration would like to present their push for higher health insurance fees as a matter of the prudent management of a faltering program, when put in the context of recent antagonisms at the UCs, it appears much more as an attempt to find a politically tenable means of raising student fees while claiming not to be doing so.

It's one of their backup plans.  We'll know in a few months whether it works.

[Update; 5/13/13: The outcome of the latest round of health insurance negotiations: no more caps on care, but variably increased fees.] 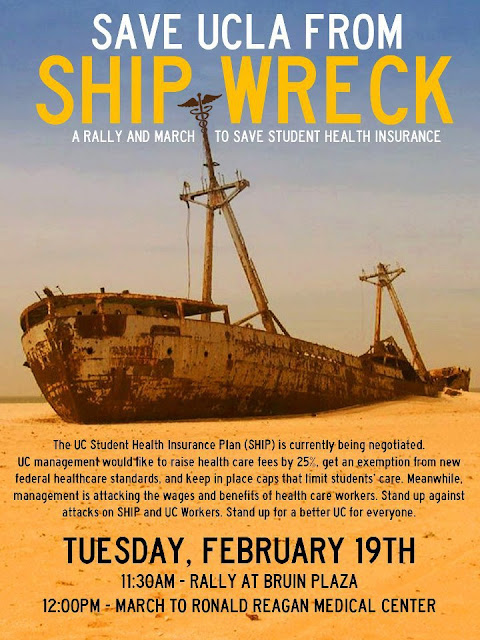 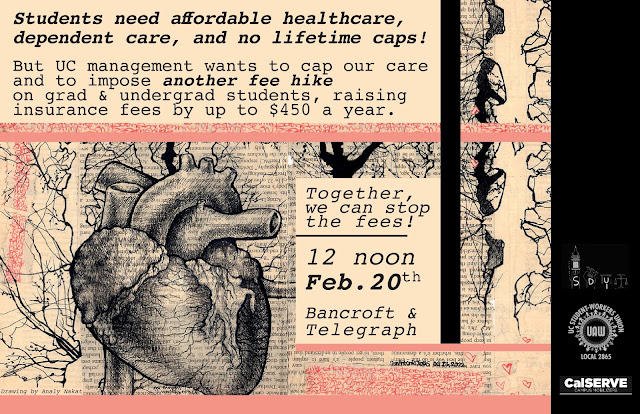