Now that the UC administration has begun a full-fledged public relations campaign to raise tuition by about 5 percent per year for the next five years (adding up to an over 25 percent hike in total—if you calculate it out, it’s a 27.6 percent hike by 2019), it’s worth taking a second to think about how money moves through the university. As always, administrators justify the tuition hike by talking about how funding from the state has decreased. In a joint statement last Thursday, the chancellors of the ten UC campuses wrote the following: “State funding for the University is still $460 million below what it was in 2007-08, even though we are educating thousands more California students.” The proposed tuition hikes, they suggest, are necessary to make up for the difference.

This argument about the decline in state funding is a reasonable one, made by neoliberal university administrators and many defenders of public education alike. But the argument also has some pretty significant blind spots. The point isn't that state funding hasn't declined, but that this real decline doesn't actually do all the work UC administrators are suggesting it does. Let’s see what’s really going on. 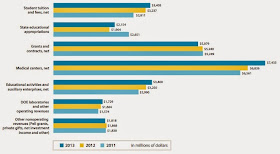 These data come from the UC’s publicly available financial reports, one from 2007-2008 and the other from 2012-2013 (for some reason, that’s the most recent report available on the site). Let’s start with the data on state funding. One thing that’s interesting to note here is that state funding is not continuously declining—in fact, it actually increased by about $400 million from 2006-2008 and again by about $200 million from 2012-2013 (as a result of Proposition 30). Furthermore, as the text below the graph notes, “[t]he last year that educational appropriations were above $2.9 billion was 2003.” So we could argue that between 2003 and 2008 state funding remained more or less constant. Obviously, the financial crisis, which hit the following year, interrupted this trend. Still, from 2011-2012, there’s a big drop in state funding, but the following year it begins to rise again.

So where are UC administrators getting that $460 million figure from? It probably has to do with the fact that state funding has actually continued to increase since the passage of Proposition 30 in 2012. Anyway, we’re just using the financial report data here because it’s the most easily accessible and has these convenient three-year comparisons. Either way, we're more than giving them the benefit of the doubt here on the question of state disinvestment.

Now let’s look at the change in tuition revenue (the 2013 numbers are above).

The first thing we notice is that, unlike fluctuating state appropriations, tuition revenue has steadily and consistently increased over this entire period. This is due in part to rising enrollment and in part to tuition hikes. Recall that state funding was actually increasing between 2006 and 2008, but nevertheless the regents were still raising tuition by at least 5 percent per year.

Over the period in question, tuition revenue grew significantly more than state funding fell. That extra $300 million in inflation-adjusted dollars is nearly three times as much as the proposed tuition hike will bring in. In spite of the story that administrators continue to tell, the UC’s own data show that tuition revenue has more than made up for the decline in state funding. If this were all that was going on, there should be no deficit. Of course, if you compare current levels of funding to the 1970s or 1980s, you’ll find a big difference. But you’ll also find that expenditures have increased a lot as well—among other things, the administration is spending a lot more money on itself. (Just the latest example: the Regents recently agreed to give chancellors a 20 percent raise.) This isn’t meant to be an exhaustive explanation, but to point out that when administrators talk about declining state funds what we should be asking them is what are they doing with all that extra money that’s rolling in.